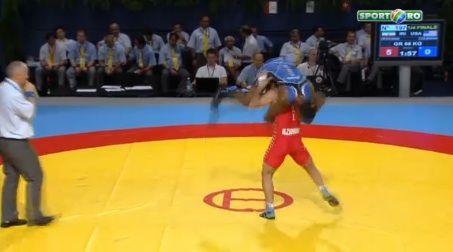 Last week, Ellis Coleman made headlines on several MMA sites after pulling off “The Flying Squirrel” st the Junior Greco-Roman World Championships. He even appeared on today’s episode of ESPN First Take.

Whenever fighting fans get a taste of a skilled or dynamic wrestler, they always want to know when he is going to transition into MMA. Coleman still has a long wrestling career in front of him. However, he may be preparing for an MMA career in the future.

The good folks over at Flowrestling.org captured a video of “The Flying Squirrel” himself rolling with Bellator welterweight champion Ben Askren as a warm up for the 2010 Beat The Streets Gala. It is at least a start, but as Olympian Spenser Mango says in the video, “I think Ellis needs some practice.”

Watch more video of 2010 Beat The Streets Gala on flowrestling.org