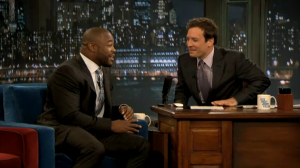 Evans, who is also a regular co-host on ESPN’s “MMA Live” was comfortable and confident in his verbal exchanges with Fallon. Evans’ demeanor was light-hearted and humorous as he gave mainstream America something UFC fans have been seeing for years, an impression of his mother. Evans learned early on it was a gimmick that always produced laughs and a good response, and he has stuck with it, and interviewers often request it.

Somehow talking about music Evans listens to prior to fights led to the fighter singing a few bars of “Stand by Me” accompanied by Fallon’s band. And the man actually has a good voice believe it or not. Also, Evans talks about some good advice he got from MMA legend Randy Couture prior to his fight with Chuck Liddell at UFC 88, the fight by the way, many consider as the fight that put Evans on the map.