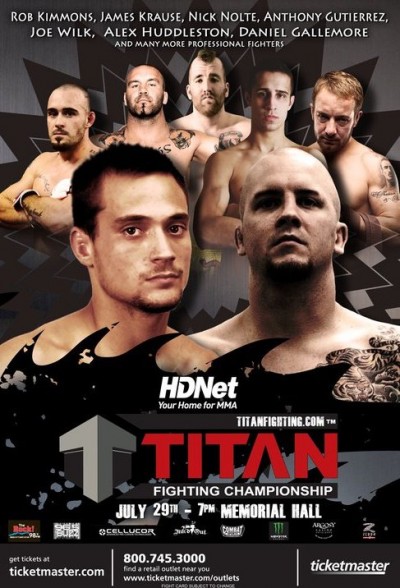 ProMMAnow.com will provide LIVE results and play-by-play commentary throughout the event starting at 10 p.m. ET.

Round 1 – Leg kick exchange. Front kick from Nolte, backs Navarro to the cage. Elbow from Nolte, leg kick from Navarro. Stiff left jab on the chin drops Navarro. Nolte takes Navarro’s back as he turtles up. Navarro grabs the wrist of Nolte. Nolte softening him up with little shots. Navarro lays on his back and Nolte locks on the arm triangle. Navarro trying to fight it, and he gets out. Nolte landing shots from behind while on their knees. Nolte postured over Navarro landing shots. Big left hand from Nolte scores. Navarro grabs a foot but is taking big shots. Navarro gets up and drags Nolte down. Nolte locks on a guillotine but Navarro pops out. Great scrambles here. Elbow from Navarro as he postures over Nolte. Nolte threatening with subs. Navrrao tries to pass guard. Navarro backs out and lets Nolte up. Nig right left hands from Navarro land flush. Nolte 10-9.

Round 2 – Leg kick from Navarro. Left hand and a leg kick from Nolte, big body shot. Navarro went down for a moment from a leg kick. Nolte tries a trip takedown. Clinched against the cage, two knees from Nolte. Pace has slowed as they fight from the clinch. Knees to the thighs from Nolte. Nolte staying more active. Finally the ref separates them. Knee  to the body from Nolte, he checks a kick. Navarro lands a couple punches, they clinch. Two minutes to go. Ref halts the action as Nolte takes a low blow. Leg kick from Nolte and a couple jabs. Body shot and leg kick from Navarro. Navarro bouncing around, leg kick. Nolte lands a leg kick and a big kick to the gonads. The ref chuckles and tells Navarro to stay down a bit. Navarro bouncing, slips a punch, but Nolte clinches and puts him down. Navarro gets right up and goes right back down. Ten seconds left. Navarro lands some elbows, that’s it.

Round 1 – Leg kick from Wilk. De Souza grabs a kick, lets it go. Clinch. Collar tie and knee to face from Wilk. Another knee to face, another to the chin. Souza buckles, goes down with Wilk in his guard. Wilk controls the scramble. Wilk with elbows and hammerfists from side half guard. De Souza looking for a kneebar. Wilk works from the top, landing several shots. De Souza gets to his feet with Wilk riding his back. De Souza gets out, clinched against the cage. They wrestle. De Souza grabs a single, Left rabbit punches from Wilk. De Souza still holding the leg, goes for the takedown but ends up on his back. Wilk attacks with punches. De Souza stands, gets put in a guillotine. He’s out. Wilk with a knee to the gut, clinch. Wilk 10-9.

Round 2 – They fight from the clinch. Wilk has has back with a body lock. De Souza gets pushed against the corner. Takes a knee from Wilk. Another one. They  jockey for position. Still in the clinch after about two minutes. Wilk just leaning on de Souza, throwing the occasional knee. De Souza finally puts Wilk against the cage. Drops levels. Wilk gets off the cage, reverses De Souza. Ref puts them in the center. Leg kick from De Souza. They trade big punches. Big slam from The Nose. He gets half guard on top, and that’s it my friends for round two. 10-9 for Wilk.

Round 3 – Leg kick from De Souza. De Souza backing Wilk up. Leg kick. Clinch against the cage. They go down with Wilks on his back with a hook in. They scramble, Nose lands some hammerfists. De Souza gets to his knees. Wilk has a front headlock, lands a couple knees to the head. Another. De Souza puts one hand on the ground. Immediately takes another knee as he picks his hand up. De Souza stands. Clinch, and Nose picks him up for a big slam as De Souza goes for a ride. Nose in half guard. Wilk on top inside full guard. Wilk inside full guard. De Souza with butterfly guard. De Souza gives up his back. Nose goes for the choke. Twenty seconds left. De Souza gets side control on top. He stands up. And that’s it. Wilk 10-9, 30-27.

Round 1 – Kimmons scores first. Grabs a half collar tie and lands sevaral punches. They separate. Leg kick from Seguin. Kimmons puts several shots to the body from the half clinch. Seguin landing some nice punches, then Kimmons ties him up against the cage. Seguin pushes him off lands a couple big punches. Kimmons seems unfazed. Lands an uppercut from the half clinch. Knee and an exchange of body shots. One two three from Kimmons. The wrestle and dirty box in the center of the cage. Both guys landing nice shots here. Big elbow from Seguin. It looks like a very violent dance. Kimmons with one underhook and they exchange one arm punches. Kimmons lands severa; punches. Seguin smiles, lands a leg kick. Hard to score but I got it 10-9 Kimmons.

Round 2 – Body shot from Seguin, right hand. Leg kick. He hops in with a couple punches and gets out. Kimmons much less mobile. Seguin looking much more aggressive. he lands several body shots.  Backs out comes back in with more body work as they clinch. Seguin winning this round, he made a good adjustment after round one. He’s staying much more active. Kimmons with a four punch combo from the clinch. Kimmons has a bad cut on the top of his head. Seguin lands a three punch combo. Kimmons stays on him as a woman shrieks. Kimmons hunting, he pushes Seguin to the cage. Kimmons looks like the character from God of War right now. Uppercut from Kimmons. He pushes Seguin to the cage. They battle from the clinch against the cage, knees. Punhes to the gut from Seguin. Knees from Kimmons, to the head. Close round. 10-9 Kimmons.

Round 3 – Body jab, leg kick from Seguin, lands a left hook. Left jab and overhand right from Kimmons. Nice big one two from Seguin the rocks Kimmons’ head like a bobble head. Seguin swings, clinch, body shots from both. Seguin backs out. Leg kick from Kimmons. Two right hands from Seguin. The wrestle from the clinch with two minutes to go. This fight will likely be hard to score. Kimmons getting better of the clinch game with knees. Seguin backs out. He blocks a high kick and lands several body shots. Seguin slides in with a big punch to the chin. Nice right from Seguin. They exchange body shots from the clinch. Less than a minute to go. Seguin looking for the big one. One two and a kidney shot from Seguin. Leg kick from Kimmons. Kimmons shoots, stuffed. Seguin coming forward as time runs out. 10-9, 29-28 Seguin.

Round 1 – I have a signed Tonya Evinger photo, it says “cum with me”. No lie. Evinger with a spinning back kick and gets put on her back. McMann takes her down, has side control. McMann in half guard. Evinger throws her leg up looking for something. McMann looking like a female Matt Hughes, controlling position. She was the first U.S. woman to medal in the Olympics. Evinger doing good staying out of punishment. McMann can’t do much from here. Tonya hanging on. Ref calls for action. Elbow from McMann. Pretty much a stalemate at this point. Ref stands them up. Evinger bouncing and moving around like a female Tony Hawk. Evinger pulls guard after missing a spinning wheel kick. Evinger with an elbow from her back.

Round 2 – Evinger bouncing, body kick. McMann clinches against the cage. They jockey. McMann puts her on her back. McMann in full guard. Evinger kicks her off and gets to her feet. Spinning heel kick misses from Evinger.  She bounces around, throws a high kick, blocked. McMann puts her own her back, lands up on top in half guard. McMann stays in control for a good length of time. Landing small shots. Only thirty seconds left. Evinger kicks and McMann tries to find space to punch. McMann 10-9.

Round 3 – Hook kick misses by Evinger and McMann puts her on her back. McMann inside full guard. She powers her way to side control. Knee to the ribs. Evinger locks up an upside down triangle. McMann’s head slips out. She’s in side control. McMann looking for an armbar. Evinger defending well but still on her back losing this fight. McMann puts some punches in her side. Evinger goes for a kimura. McMann bleeding and dripping blood. Ref stands them up. Blood coming from McMann’s nose. Couple of kicks from Evinger. She misses a punch, they tie up. Knees from McMann. 10-9 from McMann, 30-27 for McMann.

Round 1 – The crowd loves Krause. He is about five inches taller. Leg kick from French. Right round kick to the head is blocked by French. He swings, just misses Krause’s chin. French shoots, Krause rolls, they scramble, he attempts a guillotine. French rolls out ends up on top of Krause, has a front headlock. French ends up on top inside guard. Krause locks on a guilltone, pulls it tight and French pulls out. He lands some punches from the top. Just over two minutes to go. Three punches from French. French on top in half gaurd, he’s winning the round due to control so far. French attacks from inside guard. He stands over Krause, tries to pass, moves to half guard. . This has been a night of grinders it seems like. They roll and Krause ends up on top. They stand, French gets a takedown and puts Krause on his back, big elbow from French. 10-9 French.

Round 2 – French misses a punch. Jab from Krause. Leg kick from Krause, cross on the chin. Left hand from French. French ducks a hook, gets a takedown. Just under three minutes to go. They scramble. French takes Krause’s back but they roll, Krause ends up on top inside guard. Ref wants action. They scramble. Krause locks up a guillotine but lets it go and French is on top. French 10-9.

Round 3 – Front kick from Krause hurts French, he wobbles. Head kick from Krause and a couple punches. Body kick lands from Krause. Uppercut and cross from Krause. French goes down and Krause follows to the canvas, on top in half guard. Krause tries a choke but French rolls him off and over. Krause gets back top control and locks on a body triangle with just under three minutes to go. Krause holding the choke for a long time but French is free. Krause remains inside guartd with two minutes to go. Krause is winning his first round. Looking for a guillotine. Lets ot go, lands an elbow. Krause pushes him off and gets to his knees and puts Krause on his back. Forty seconds to go. French on top in half guard, small elbow from French. 10-9 Krause. 29-28 French.

Let me just say when all but one of your eight televised fights go the distance, it makes for a long night. I’m off to bed.