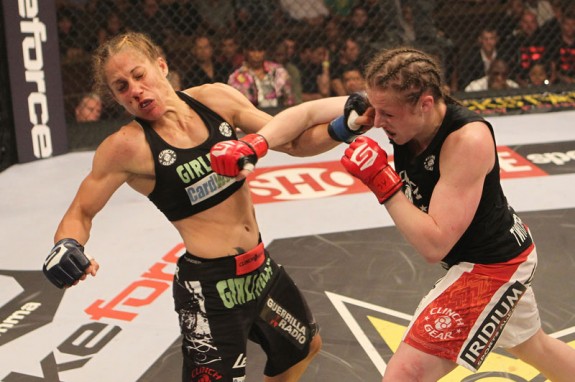 After losing her title to Marloes Coenen (19-4) in Oct. 2010, Kaufman has had but one goal in mind, to get revenge against the only woman to ever defeat her (third round submission) and reclaim her title as the number one 135-pound female fighter in the world.

Carmouche was a means to an end. Not that Kaufman was over-looking her or underestimating her — after all, they don’t call her “Girl-Rilla” without reason — but she was never the goal.

Kaufman must wait is already back in the gym training while Coenen puts her title on the line this weekend against Miesha Tate (11-2), an opponent Kaufman defeated via unanimous decision in May 2009. Kaufman will then fight the winner of Tate vs. Coenen for the title.

ProMMAnow.com (www.prommanow.com) caught up with Ms. Kaufman this week to discuss her win over Carmouche and to get her thoughts on the Tate vs. Coenen bout. We also got her opinion on foot stomps and asked her if she was worried about the future of women’s MMA.

PRO MMA NOW: Hi Sarah, thanks for talking with us at ProMMAnow.com (www.prommanow.com). Congratulations on an impressive performance and win over Liz Carmouche Friday night at Strikeforce in Las Vegas. How are you feeling physically now a couple days later and how would you assess your performance — are you happy with how everything went?

SARAH KAUFMAN: Physically I feel great. I have a few bruises (quite a few on my butt from the cage :D) but they are almost completely unnoticeable. I feel like I showed a very dominant side to my striking and wrestling and would have loved to get the KO; however, I knew that Liz would be a tough competitor and she truly was.

SARAH KAUFMAN: My corner didn’t mention winning or losing rounds, but I knew that I was doing ok. The first round was definitely closer than I would have wanted – with a majority being stuck against the cage – but I knew I was winning the second and third dominantly and wasn’t worried.

PRO MMA NOW: Do you remember any specific thoughts or things that you were trying to focus on during the fight or as the fight progressed — or were you more or less just on “auto pilot”?

SARAH KAUFMAN: I was listening a lot to my coach Adam Zugec and Greg Jackson. We had planned on Liz being strong and trying to use that to hold against the cage, and I really had to get into the groove in the second to use my length and keep her from grabbing on to me. In between rounds Adam and Greg were talking about using my longer punches and really drawing Liz in, and I’m happy I was able to listen and capitalize on what they were saying.

PRO MMA NOW: Were you surprised that you were not able to hurt Liz enough to finish her or were you kind of expecting this fight to go the distance?

SARAH KAUFMAN: I never want a fight to go the distance, but I knew that Liz was very tough. I think if the first round had been similar to the second and third the fight was heading in a direction where a stoppage would have been more likely. Liz also didn’t engage too much which makes it harder to get that finish without jumping into a range where she could have grabbed onto me.

PRO MMA NOW: Let me ask you this. Are there certain fights, before they happen, in your mind you pretty much have a feeling or you know that you are going to finish that opponent, or do you just never have a clue whether or not you’ll be able to finish someone?

SARAH KAUFMAN: It’s not easy to know whether you will get a finish or not. Certain styles allow for more power strikes or positions that would lead to finishes; however, it’s all about how a person fights on fight night. Also, freak events can happen and anyone can get caught with anything.

PRO MMA NOW: What is your “philosophy” on finishing fights? (should that always be the goal, is it something you think about, etc.)

SARAH KAUFMAN: As a fighter you don’t want to rely on judges to score the fight. As fighters get to higher levels there are less technical separations between two people and fights can often be razor thin decisions. A finish is almost never controversial and fans LOVE finishes…so it’s a win-win for a fighter.

PRO MMA NOW: Was Liz stronger than you thought she would be — how did you feel when you would lock up with her or jockey for position and did you have any trouble imposing your will and taking the fight where you wanted it to go?

SARAH KAUFMAN: I was expecting Liz to be strong, and to be honest wasn’t sure how I was going to stack up. Once we got clinched I knew that I was ok and wasn’t going to get outmuscled so just had to make sure my feet and body were in positions that didn’t lend to takedowns or getting pushed up against the cage.

PRO MMA NOW: Talk to me about foot stomps. What goes through your mind when Liz stomps your feet when you guys are clinched up against the cage? I noticed you gave her a few back later on; was that a little payback? Do they hurt during the fight, are they aggravating and are your feet sore at all today?

SARAH KAUFMAN: I think foot stomps are really funny. If you noticed I didn’t move my feet it’s because they didn’t hurt. I don’t know of any fight that has ever been stopped due to foot stomps. I believe it’s probably just used to keep busy but not really do too much damage. I’m sure if you took enough heel stomps to the top of your foot it would be sore the next day, but mine feel totally fine. I even went for my usual morning after run without a second thought.

PRO MMA NOW: In a perfect world, I believe you said, you would like to see Marloes Coenen defeat Miesha Tate so you could win the title and get back your only loss. The odds-makers do have Marloes as the favorite by a little, but do you personally believe Marloes will win that fight? — And Miesha stated she wants to put Marloes down and basically control her with her wrestling and use ground an pound or possibly submit her. Any chance Miesha submits Marloes?

SARAH KAUFMAN: Anything is possible in the fight game, and I have no doubt that Miesha would like to get the fight off the feet right away and try and control on the ground. I think it’s going to be a very competitive fight and it’s a hard fight to call.

PRO MMA NOW: How have you or how will you celebrate your win and how will you spend your time these next few months until your title fight?

SARAH KAUFMAN: I don’t really celebrate too much. I went for food with my coaches and team who made it to Vegas, but that’s about it. I’m already back training in the gym and trying to improve on all areas of my game.

PRO MMA NOW: When could we possibly see that fight between you and the winner of Marloes vs. Miesha? (rough estimate) How soon would you like it to happen?

SARAH KAUFMAN: I would like the fight to happen in a week, haha, but realistically I could see October-November as a great time frame for both myself and Marloes (once she wins) to get prepared for the rematch.

PRO MMA NOW: Here you were fighting for the no. 1 contender spot, yet they had you on the Challengers card. Any qualms about that or do you understand it?

SARAH KAUFMAN: That’s always a tough question to answer. Women in MMA have had huge opportunities and surges to then take five steps back, so I’m not quite sure. However, I do feel confident that as long as Strikeforce is aroud, females will be involved with them.

PRO MMA NOW: Thanks so much Sarah for taking time to do this. Any final words of wisdom or would you like to thank anyone?

SARAH KAUFMAN: I’m really looking forward to getting my title back…and hopefully before 2011 is up! Just want to say a quick thank you to all the fans who have supported me as well as pushed for the Liz Carmouche fight. Also my coach Adam Zugec, Ty Goodale, Greg Jackson, my ZUMA teammates and my sponsors TheSoulAssembly.com, Clinch Gear, GMAC roofing, Lexani Wheels and Polanti. Last, please follow me on twitter: @mmasarah.