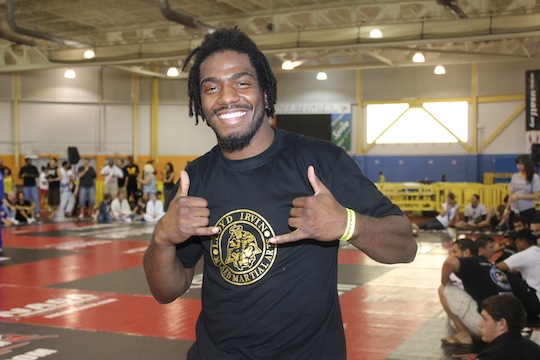 Ronald “The Choir Boy” Stallings (pictured) will make his Strikeforce debut against Adlan Amagov on July 22. Photo courtesy of MMA in DC.

Maryland’s Ronald “The Choir Boy” Stallings (9-3, 1 NC) will make his Strikeforce debut Friday at Strikeforce Challengers 17 at the Palms Casino Resort in Las Vegas. The Team Lloyd Irvin middleweight will face Russian fighter Adlan Amagov (7-1-1), who will be fighting on U.S. soil for the first time.

A lot is on the line here for Stallings. Having been fighting professionally since 2003, this is his first fight on “the big show”, as they say. A win here could help him start to take that next step forward in his career, and a loss would slow the process.

ProMMAnow.com (www.prommanow.com) caught up with Stallings on Thursday to find out how much he knows about Amagov and how important this fight is for his future. Stallings also filled us in on why he has been out of action for the last year, who helped him get ready for this bout and the one thing every reader should know about “The Choir Boy”.

PRO MMA NOW: Hi Ron, thanks for taking time to talk with us here at ProMMAnow.com. How was your camp and how are you feeling as you prepare to take on Adlan Amagov tomorrow at Strikeforce in Las Vegas?

RON STALLINGS: Training camp was awesome. A lot of hard work. we had plenty of sparring partners to play around with the flashy kicks and everything. And then in addition to all the tough workouts, for most of the camp, I was driving from Aberdeen everyday to Camp Springs which is about one-and-a-half to two hours each way and then three weeks ago my wife and I had a baby girl. So we have been rolling! I’m feeling real good, best shape of my life , I’m ready to handle business.

PRO MMA NOW: How much do you know about Adlan Amagov and have you been able to watch any of his fights?

RON STALLINGS: I watched a few videos and he kick pretty good.

PRO MMA NOW: From what you know about your opponent, how do you feel you match-up with him?

RON STALLINGS: I match up good with him, he can kick fast but Im fast too. My boxing and my Muay Thai is fast and sharp. That’s how I feel about that. Oh not to mention I train with some of the best BJJ guys in the world so I feel confident in what I can do!

PRO MMA NOW: Now you’ve been fighting professionally since 2003, but this is your Strikeforce debut, it will be shown LIVE on Showtime. Would you say this is the biggest fight of your career, and how important to your career is putting on a good performance in this fight?

RON STALLINGS: This is most definitely the biggest, with a great showing the door is wide open to the top.

PRO MMA NOW: From what I could tell, this will be your first fight in over a year. Have you been dealing with some injuries or is there some other reason for the long layoff?

RON STALLINGS: Yes there were some injuries, for the most part we have just been training.

PRO MMA NOW: I saw a video recently where I think you were doing some training with Phil Davis. How often or how much have you worked with Phil and how have you guys been able to help one another?

RON STALLINGS: I have worked with Phil for the last few years, just recently I was out there to help out with his prep for Lil Nog because he needed a south paw. From all the training session we’ve had over the years he has most definitely helped with my wrestling and grappling. Striking too, Phil can strike now that guy hits hard! Everybody at Alliance has really helped me, especially Brandon Vera and Eric Del Fierro.

PRO MMA NOW: Did Phil help you any get ready for this fight and who are some other guys you’ve worked with to prepare for this fight?

RON STALLINGS: The things I have learned from all the guys at Alliance have help me prepare for this fight my cardio is tip top because of the guys and D’angelo Kinard of Advance Sports Performance. All the guys at Team Lloyd Irvin have been helping big time. Sparring session have been crazy because I would have six or seven dudes there to kick my butt. Big shout out to Frank Camacho, Tenhey Dixon (skinny man), and all my other sparring partners! You guys kick my butt!

PRO MMA NOW: What does the future hold for Ron Stallings; what are you looking to achieve before it’s all said and done?

RON STALLINGS: Plain and simple, Choir Boy will see the top of the mountain.

PRO MMA NOW: Tell the Pro MMA Now readers THE ONE THING about Ron Stallings that they should know.

RON STALLINGS: Ron Stallings is favored by the Lord. All my aspirations and goals are to glorify my Father in Heaven.

PRO MMA NOW: Thanks for speaking with us Ron, are there any sponsors or anyone you would like to thank?

RON STALLINGS: I want to give shout out to my wife Nicole, my brother Joey, Master Lloyd and all my Team Lloyd Irvin Family and to my guys at Top Flight MMA in Aberdeen, Md. I want to shout out teamlloydirvinusa.com, advancesportsperformance.com, 12plive.com, and recoverydoc.com. And Thanks to everybody that has been praying for me and my family.