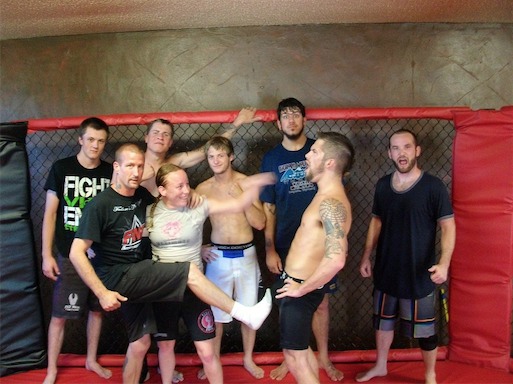 Well, I’m back to share some more adventures from my career. Since my recent victory against Lacey “The Ladie” Schuckman on June 25 in Denver, I earned myself the number three spot on the Fight Matrix professional women’s world rankings at 110-pounds and below, as well as being the Beatdown MMA 110-pound champion. I cannot wait to defend it!!

We stayed in Denver for a few days; went to the zoo and hung out with some friends. Our road to Billings, Mont., wasn’t as smooth as we were expecting. We ended up having four blowouts on our RV, however, we met some cool people and got some training in along the way.

In Casper, Wyo., we met Margaret Bloom and the whole crew at Fight Syndicate, where we trained with them a couple nights over the Fourth of July weekend. What a great way to be waiting for a tire… Then we made our way to Sheridan, Wyo., where we trained at Harbour Combat Club — a very inviting group of guys, a big thanks to Glenn Hall and all of the guys there for being so hospitable, we had a fantastic time and a couple evenings of good grappling!!

When we finally made it to Billings, Mont., we settled in, and the first week did a bunch of local PR work for myself and the awesome gym where I am doing my next eight-week fight camp. The Grindhouse is a 7,000 sq ft facility with 2,000 sq ft of mat space, a cage, boxing ring, bag racks, weights and a respectful group of people to play with.

We met the owners of The Grindhouse back in April when I fought in Sidney, Mont. We all got along and we had an open invitation, so we decided to come up here after my title  fight in June. Please check out The Grindhouse on Facebook or get in here and train!!

Yes, I said eight week fight camp… I am fighting in North Carolina, Sept. 24, for BlackEye Promotions. I haven’t signed a contract yet, but I will be on this card!! I am super excited because I have a lot of very supportive fans there and I would love to meet them. Stay updated on my Facebook Fan Page!!

Thanks for your support!! And also a special thanks to Jack Bratcher and ProMMANow.com for allowing me to share with all of you!

Oh and here’s a crazy little fact, I was the first Pro female MMA fight in the state of Montana! I won armbar in the second round.


“Little” Patricia Vidonic chronicled her journey to winning the Beatdown MMA women’s 110-pound title in her “Road to the Championship Blog”. Now that Patricia has achieved that goal, readers can follow “The Vidonic Chronicles” as she prepares for her next fight and continues her journey toward becoming the top 110-pound female MMA fighter in the world.