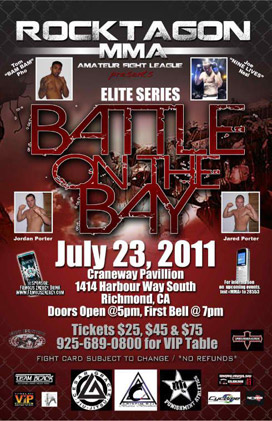 Richmond, CA. July 19, 2011 – Ohio’s premier amateur mixed martial arts promotion, Rocktagon MMA, recently announced that their highly touted “Amateur Elite” MMA series will debut on the West Coast on July 23. In true Rocktagon MMA style, “Battle on the Bay” will feature the best in amateur MMA talent. The fight card is stacked with compelling match-ups and features many of California’s rising MMA stars. “Battle on the Bay” will take place this Saturday at the spectacular Craneway Pavilion in Point Richmond, California.

According to Rocktagon MMA President Lorenzo Gentile, “We are very excited about making our debut in the Western region on July 23 and our national promotions director Rick Gutierrez has been working very closely with promoter Johnny Fever to make it happen. We couldn’t have chosen a better person to align ourselves with or a better state to make our West Coast debut.”

Rocktagon MMA has sold out countless East Coast events and shows no signs of slowing down as they expand their reach to the West Coast. According to Gentile, the ‘Amateur Elite Series’ event in California marks a significant milestone for the organization. “This West Coast event officially changes Rocktagon’s status from a regional to a national fight promotion. We are committed to taking highly skilled amateur fighters to the National level, and expanding our reach to include the Western region allows us to do just that.” Gentile stated.

The always exciting and dynamic Porter brothers out of Crispim BJJ will also be featured on the card. At 135lbs Jared Porter will be facing Joe Silva, a well-rounded fighter out of Combat Sports Academy in Dublin, CA training under Kirian Fitzgibbons. His Brother Jordan Porter, competing in the 155lb division, will square off against Jaja ‘The Renegade’ Holt out of Placerville Ca. These are just a few of the “Battle on the Bay” high-octane amateur bouts.

*Full “Battle on the Bay” Line-up:

Announcing the Rocktagon MMA fight action will be none other than Donald DeNoyer. The dynamic sports announcer, known for using the catch phrase ‘It’s Time to Go to War’, has an impressive portfolio that includes many notable MMA organizations. Celebrity guests Cesar Gracie and Nate Diaz will also be in attendance. Fight fans will not want to miss this event!

“Battle on the Bay” will take place on Saturday, July 23 at Craneway Pavilion in Point Richmond, California. Doors open at 5:00pm and fights begin at 7:00pm. Tickets are on sale now! VIP tables are also available. Please call 925-689-0800 for more information. To learn more about Rocktagon MMA, please visit www.rocktagonmma.com.