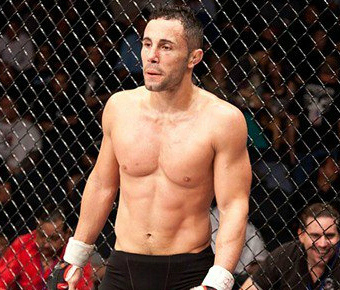 While training for his debut fight with Bellator last year, current Combate Extremo Featherweight Champion Shah Bobonis (11-6) suffered a sprained knee and as a result never made his debut with the organization.

For some, what happened to Bobonis would be considered a lost opportunity, but for the former minor league baseball player turned MMA fighter, Bobonis views what happened as a blessing in disguise.

Since his injury Bobonis has gone on to win three of his last four fights, and he was recently invited to be a part of UFC Bantamweight Champion Dominick Cruz’s (18-1) training camp for his UFC 132 bout against Urijah Faber (25-5).

Now, Bobonis is hopeful that if he can win his next couple of fights he might be invited to participate in Bellator’s upcoming 135lb tournament, and thus realize the debut that has already eluded him once.

Bobonis spoke with ProMMAnow.com‘s Josh Cross earlier this week about how his training camp is going in preparation for his upcoming fight, how he became involved in MMA after a chance meeting with Strikeforce Fighter Jorge Masvidal, and what secret Dominick Cruz let him in on during the four weeks they spent together training.

PRO MMA NOW: Can you talk about how you got involved in MMA?

SHAH BOBONIS: I wrestled a little bit in junior high and high school. I was more of a baseball player though, and I ended up playing a little bit of pro ball. When I was done playing pro ball I was just boxing in the amateurs just to stay in shape really and compete at something. The boxing gym that I was going to actually Jorge Masvidal was doing some boxing training there as well and we got to talking and he said, “Hey, if you wrestled in high school you should try this MMA gym. You’d like that too.” So I went to the MMA gym, fell in love with it, and two years after that I signed to fight pro for the first time.

PRO MMA NOW: What was it like making the transition from playing professional baseball to competing in MMA?

SHAH BOBONIS: Well I’ll tell you one huge difference is the type of shape that you have to be in. Not to say anything bad about baseball, but the physical conditioning for MMA is completely different. The discipline I think just to be successful in MMA you have to have a lot of self discipline if you want to cut weight the right way, train twice a day, learn all of the skill sets needed for this sport. I’ve played baseball with a lot of guys who were just so naturally talented that they got away with you know being lazy and not working that hard, but they just had so much God given talent that they could make it to the show on that alone.

PRO MMA NOW: Now you’re currently the Combate Extremo Featherweight Champion. What was it like to win that title and how have things changed for you since winning it?

SHAH BOBONIS: You know it has opened up a lot of doors for me and given me some good exposure. I know the day I got back from winning that title I got called out to go train with Dominick Cruz and be a sparring partner for him getting him ready for Urijah [Faber]. I’d done countless interviews since I’ve won that title and my next fight now is a main event fight here in the United States. It has done a lot of good things for me.

PRO MMA NOW: What was it like spending those four weeks training with Dominick Cruz, and what were some of the things that you took away from being a part of his training camp?

SHAH BOBONIS: Well I tell you what, Dominick let me in on some of his secrets of setting up that far knee block that he gets everybody with. The four weeks out there were great. We had guys coming in and out of that place like K.J. Noons, Ben Henderson, and Ross Pearson just to name a few. Just a bunch of pro guys and high level UFC and WEC vets coming into spar all of the time, and that’s really rare to see. To go to a gym and get that type of sparring on a regular basis, I’ve never experienced anything like that.

PRO MMA NOW: You were scheduled to make your debut with Bellator last year, but an injury kept you from that. Can you about what that was like and give us an update on that injury?

SHAH BOBONIS: Yeah, I was scheduled to do a catchweight fight with Eric Luke from American Top Team. He’s a real good guy, and I was training hard. It was going to be my first fight at a catchweight under 145lbs. I sprained my knee pretty bad and I just wasn’t going to be able to do enough cardio to make the weight so I let the matchmaker know about a month in advance. Since then I haven’t been taking any short notice fights or you know fights that I just haven’t been prepared for and it has worked out good. I’ve won three in a row and four of my last five so it was a blessing in disguise.

PRO MMA NOW: You’re still looking to debut with Bellator at some point in the future though right?

SHAH BOBONIS: I’d love to. You know hopefully by the end of the year I’ll be about 14-6. I’ve seen other guys in the tournament with similar records so I would love to get in that 135lb tournament if possible. If not, you know I’d love to fight anybody at 135 in the world. There are not too many guys I would say no to.

PRO MMA NOW: Can you talk about your upcoming fight on August 19?

SHAH BOBONIS: Yeah. August 19 I’ll be fighting for Fight Time Promotions at Fight Time 6 – Pride and Glory. It’s a Howard Davis Jr. show. He is a boxing coach at American Top Team. I’ll be fighting Caleb Archer. They call him Sideshow Bob. I guess his hair kind of looks like the character from The Simpsons. He’s a hot prospect over at American Top Team. He’s 5-1. He’s been doing Muay Thai since his early teens and he’s a really good standup fighter so it should be a good fight. You know I like to bang it out too. My first instinct is always to slug it out so there should be fireworks.

PRO MMA NOW: How has your training camp been going in preparation for this fight?

SHAH BOBONIS: I train at the Freestyle Fighting Academy in Miami. We have a couple guys. We have Tulio Quintanilla who is a Bellator veteran and he’s 4-2. He has two wins over top ten ranked guys in Florida by Around the Octagon Magazine. I also train with a couple guys out of Full Contact in Homestead like ex Division 1 wrestlers like Chino Duran who is a pro MMA fighter now. He wrestled at Easter Illinois with Clay Guida. I also train with Pat Williams. He was on the same Arizona State team with Cain Velasquez, Ryan Bader, and those guys. So you know I train with a lot of high, high level guys that are giving me great workouts every time I get on the mat.

PRO MMA NOW: Now your fight on August 19 is at 135lbs, and you’re also scheduled to fight back at 145lbs in September when you defend your featherweight title. Are there any worries or issues that you might have moving back up in weight and fighting again just a month after this upcoming fight?

SHAH BOBONIS: Not really. I’ve never had one serious injury in any of my fights knock on wood. Usually I’m back to training the week after my fights. The next fight is going to be at 145lbs in Mexico defending that title and that will probably be my last fight at 145lbs ever. I won’t be making that weight cut I’ll just be maintaining my cardio for the two-and-a-half weeks until I leave for Mexico. I’ve never had problems taking fights back-to-back. I actually kind of enjoy it better because I’m already in great shape and I just have to maintain that.

PRO MMA NOW: What would be the best way for fans to keep track of what you’ve got coming up in the future?

SHAH BOBONIS: I’m really bad with Twitter right now. I’ve got to get it linked up to my Facebook. I’m not too good with computers. I’ve got to figure out how to do that, but Facebook definitely. I’m always putting up any new articles or interviews or any updates at all on my Facebook. I’m definitely the only Shah Bobonis on Facebook so that would probably be your easiest bet.

SHAH BOBONIS: Yeah, definitely my parents. They support me 100 percent in everything that I do. Also everybody at Freestyle Fighting Academy, Master Marcos and Master David, and Brawl and Maul my clothing sponsor. They do a great job for me.

PRO MMA NOW: Anything else you might want to add?

SHAH BOBONIS: If you guys need tickets to come see me fight August 19, come see me. It’s going to be fireworks. Just message me on Facebook if you need tickets and I’ll get them to you.