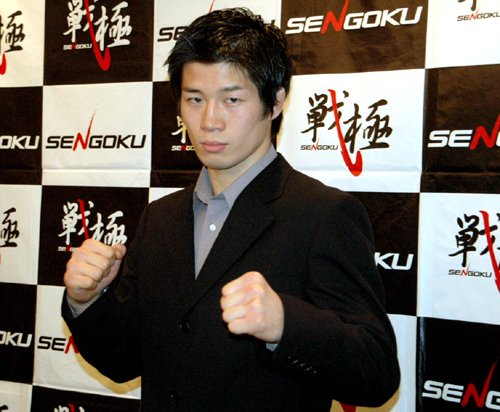 Number-two ranked featherweight Hatsu Hioki will make his UFC debut against George Roop at UFC 137. The card takes place on Oct. 18 at the Mandalay Bay Events Center in Las Vegas.

Hioki signed a multiple-fight contract with the UFC in June. Now, the promotion has announced his debut. Save for a controversial split-decision loss to Michihiro Omigawa, Hioki is undefeated since 2007. He claimed the SRC title with a unanimous-decision victory over Marlon Sandro at “Soul of Fight.” The “Child of Shooto” also holds victories over Takeshi Inoue, Masanori Kanehara, Ronnie Mann, Mark Hominick and Jeff Curran.

After receiving his walking papers from the UFC following a 1-2 record as a lightweight, Roop reinvented himself as a featherweight in the WEC. After an unsuccessful bantamweight debut, he moved up to 145 pounds and drew with Leonard Garcia and defeated Chan Sung Jung. Following the WEC-UFC merger, Roop found himself back in the world’s biggest promotion.

In the main event of UFC 137, UFC welterweight champion Georges St. Pierre will defend his belt against former Strikeforce champion Nick Diaz. The bout is expected to draw significant attention since both fighters reigned supreme is different promotions for several years.