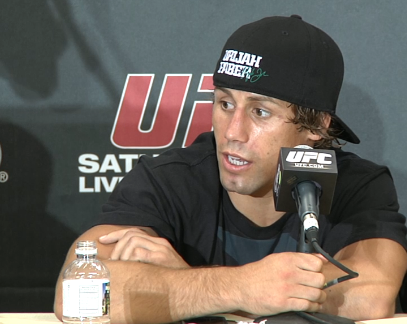 In my five huge questions UFC 132 preview I wrote:

Faber is now 32 years of age with Cruz checking in at 25 years old(he’ll be 26 in September), so time is certainly not on Faber’s side giving the rate at which fighters are evolving their skillsets nowadays. I suppose Faber could lose and then force a rubber match if this fight turns out to be a action packed. If not though, could this be Urijah Faber’s last shot at capturing a major title in MMA?

I think it’s safe to say that the fight between Urijah Faber and Dominick Cruz was all we could have hoped for and more. It was a very competitive fight, much more competitive than I thought it would be and Faber could have won that fight on the judges card and I wouldn’t have been mad at all. It was a very close fight. It would depend on how long we are talking, but I would probably favor Faber in the rematch because I think he would be able to make more adjustments than Cruz. If Faber pushes the pace a bit more and is more offensive he probably gets the nod from the judges. I would be in favor of Faber getting a another shot at Cruz after getting one win under his belt and it could take place on the December or January card.

It looks like Cruz could defend his title against Demetrious Johnson next. I have no doubts that Cruz would defeat him basically because Cruz is much larger and would be able to shut down his wrestling game if that fight comes to fruition.

In the meantime, Faber still showed that he’s an elite fighter even in a loss and will probably get another crack and Cruz soon.

5 thoughts on “UFC 132 reaction: Urijah Faber proves he is still elite in loss to Cruz”