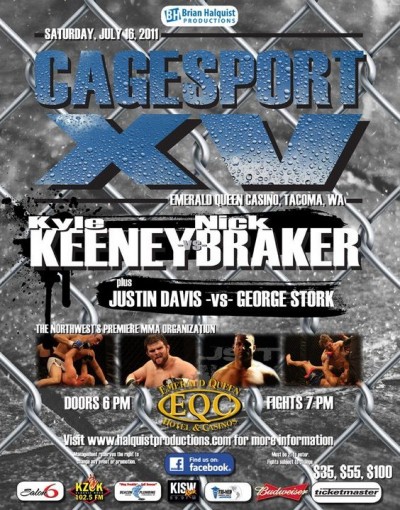 TACOMA, Wash. – Nick Braker will make the first defense of his CageSport MMA heavyweight championship when he faces challenger Kyle Keeney in the main event at CageSport XV at the Emerald Queen Casino in Tacoma on July 16.

“This is going to be a war,” said CageSport promoter Brian Halquist. “Braker and Keeney are two of the most dominating MMA fighters in the Pacific Northwest. This is the fight the fans wanted to see.”

“The opportunity to fight for the heavyweight title means a lot,” said Keeney, who was introduced in 2003 by current UFC fighter Dennis Hallman. “It’s always fun fighting in Tacoma. They are loud and get rowdy. The crowd should expect me coming out and doing whatever possible to secure the win. I want that belt.”

Keeney comes into the title bout with the added confidence of already holding a victory over Braker.

The two meet for the first time on Aug. 14, 2010 with Keeney winning by split decision in the highly-contested bout.

“The thing that impresses me about Nick Braker is his toughness,” Keeney said. “What I remember most about our previous fight is that it was a battle. I was able to get a split decision win, but honestly I felt it could’ve gone either way. Thank god the judges went my way.”

The card features a total of 10 professional bouts.

“I’ve watched George fight a couple times. I just know he is a good striker and I think we’re going to put on a good show,” said Davis, who returned from an 18-month hiatus from the sport to defeat Landon Showalter at CageSport XIII on Feb. 19. “The crowd should expect fireworks. The people want to see a fight and a fight is what they’re going to get.”

Also on the card is the rubber match between Eddie Blackburn and Justin Gardner.

Blackburn won the inaugural meeting, winning by second-round TKO, before Gardner scored a 23-seocnd knockout in the rematch.

TICKETS
Tickets are available at the Emerald Queen Casino box office 1-888-831-7655 and at all Ticketmaster outlets. Or online at www.ticketmaster.com

Get up to date information at: www.halquistproductions.com

1 thought on “Heavyweight title on the line at CageSport XV”