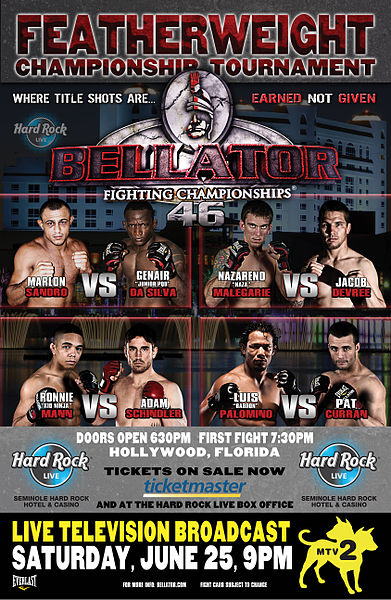 HOLLYWOOD, Fla. — The weigh-ins for Bellator 46 is took place Friday at Seminole Hard Rock Hotel & Casino in Hollywood, Fla., the same location that will host Saturday’s fight card which will air LIVE on MTV2 at 9 p.m. ET.

All fighters competing on the main card made weight without incident. On the preliminary card, however, the middleweight bout between Bellator veteran Moyses Gabin and David Baggett of Orlando was cancelled after Baggett failed to make weight.

Also, Matt McCook has withdrawn from his preliminary card bout against Alexandre Bezerra. Filling in for McCook will be Sam Jones. He and Bezerra will compete at a catchweight bout of 152 pounds.

The Bellator 46 complete weigh-in results are as follows: