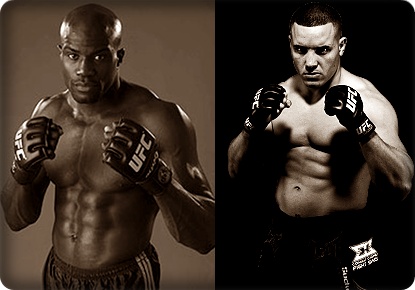 Cheick Kongo comes into this fight with an overall record of (15-6-2) with 9 wins via TKO/KO and a couple of submission wins. Kongo last fought Travis Browne to a draw, but was deducted a point in the fight due to grabbing Browne’s shorts. Kongo beat up Paul Buentello before that. Kongo is a solid kickboxer but has improved his wrestling game since making his UFC debut back in 2006. He also has some nasty ground and pound if he’s able to get the takedown and gain top position.

Pat Barry comes into this fight with an overall record of (6-2) with 5 wins via TKO/KO. He won his last outing against Joey Beltran via unanimous decision. Barry brings good kickboxing skills to this fight, most notably some devastating leg kicks. However, the biggest hole in his game is his submission defense.

Although this fight features two former kickboxer’s, I’m not so sure we’ll see an ultimate kickboxing match. I think Barry will definitely want to keep this standing, but he’ll be giving up a massive reach advantage to Kongo. He could possibly negate that a bit by throwing those nasty leg kicks of his, but that would make him susceptible to Kongo taking him down. I spoke about Kongo with top position earlier and Barry definitely doesn’t want any of that. However, Barry has good power in his hands as well and he very well could catch Kongo with counter hook since Kongo gets lazy with his hands sometimes.

I think Kongo will use his reach to his advantage, but ultimately I think he’ll be closing the distance looking to take Barry down. That would be the smart thing to do as Barry hasn’t shown much on the ground at all, and he certainly isn’t going to be submitting anyone off his back. If Barry isn’t able to get right back up to his feet I think he gets stopped via ground and pound or (gasp) submitted.