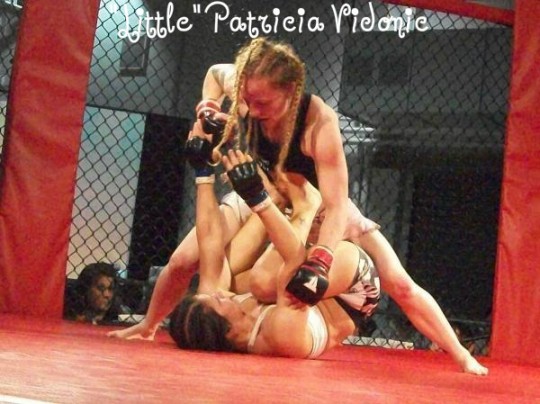 Well here we are, fight week!! I am feeling awesome both mentally and physically. My head is in this 100%, I am focused, determined and bringing my A game.

It’s like the smaller I get, the stronger I feel. My cardio is top notch, I have been working at high altitudes since December; so if this fight goes the distance, I am fully prepared.

I had no idea being pro for less than a year I would get a title shot, but this is my sixth professional bout. This week’s agenda is cardio, cardio, cardio…

My good friend, Angela Hayes, who trains at Rough House let us know we could come up from New Mexico to finish up my training there. Wow, what a great facility and coaches!!

My weight… I’m doing something a lot different and very special for this cut. I touched a little last week about working with a highly respected Olympic wrestler, coach and fighter who is guiding me through this experience (which I will take with me forever).

Her name is Tori Adams and she is taking me through a secret process of water manipulation. So far this is the best cut I have ever done. I do not feel weak, hungry or tired. I am busting my butt and feeling great!!

So after I hit the sauna and make weight on Friday morning we will be heading up to Denver for weigh-ins.

Rough House MMA is GREAT! If you are in the Colorado Springs area, you have got to stop in and check it out!! The coaches are inviting, everyone here is very helpful and supportive.

My amazing coach, along with most of the staff at Rough House aren’t just my heroes because of MMA, they are heroes because they also fought for our country and risked their lives for our freedom.

I have included some training pictures as well as bios on the coaches that have been helping me prepare for this fight. There are two boxing coaches that I would also like to thank, Yamar Resto (AJ) and George Armando Del Moral (Mondo). Also one of the grappling coaches, “The Blanket”.

So if you are in the Denver area this Saturday, please come by, say “Hi” and watch the fights! It will be at the Grizzly Rose, doors open at 1 p.m. and the fights start at 2 p.m. Lacey Schuckman and I are headlining this event, so you don’t want to miss it!!

Please share this link and also check out my sponsors: Fight Soap ~ Failures No Option ~ Damage Control Mouthguards ~ The Next Great Fighter ~ Also a big thanks to Cogburn West Performance Horses.

Professional MMA Record 12-5
Fought on notable shows such as Strikeforce, IFL, Kickdown, Ring Of Fire, No Mercy and many others
Great Motivator who breaks technique down in a format that beginners and pros can understand
World Class Fighter with great ability and enthusiasm
His work ethic and dedication carry over in his coaching style
Pancrase Grappling Champion

2010 Coach of the Year
Keith Wilson (Colorado Springs, Colo./Sunkist Kids) has been named 2010 Women’s Coach of the Year by USA Wrestling. This is the first time that Wilson has received this prestigious award.

Wilson served as a coach for the 2010 U.S. Women’s World Team in Moscow, Russia, which featured two medalists and earned a fifth place finish,

Wilson served as a World Team coach with the 2009 U.S. Women’s World Team in Herning, Denmark, which placed sixth in the team standings, with three athletes who placed fifth in their weight class.

Wilson was also a World Team coach with the 2008 U.S. Women’s World Team in Tokyo, Japan, which placed fourth in the World team standings and featured gold-medalist Clarissa Chun and bronze-medalist Tatiana Padilla.

He was also a coach with the 2009 U.S. World Cup Team, which competed in Taiyuan, China. The U.S. was fifth in the standings with a 2-2 team record. He was a member of the 2008 U.S. Olympic team staff, and has also coached at the Pan American Championships.

He has been a club coach with the Sunkist Kids since 2001. The Sunkist Kids captured the women’s freestyle team title at the 2010 U.S. Nationals, led by six individual champions.

Wilson is the personal coach for 2008 World champion and 2008 Olympian Clarissa Chun, and has worked directly on a regular basis with a number of other national-caliber women wrestlers.

Wilson is the owner and a coach at Rough House MMA and Fitness in Colorado Springs, Colo. His club specializes in wrestling, No-Gi Grappling, Jiu-Jitsu, Muay-Thai, kickboxing, boxing and personal fitness.

A native of Virginia, Wilson was a Greco-Roman Team USA member competing for the U.S. Marine Corps. He also competed for the U.S. Army. Wilson wrestled on the college level for the University of Oklahoma.

Other skills/training:
Patrick is pursuing an instructorship in the USA Thai Boxing Association under Ajarn Sirisute Chai. Patrick is currently a coach at Old School Boxing and RoughHouse MMA and Fitness in Colorado Springs, CO. Patrick coaches both amateur and professional boxers
Patrick holds a Bachelor’s in Science in Biology/ Exercise Science from Fitchburg State and has worked extensively with athletes from numerous fields. Patrick received the prestigious C.S.C.S. from the NSCA in 1997.

One thought on ““Little” Patricia Vidonic’s Road to the Championship Blog: Fight Week”