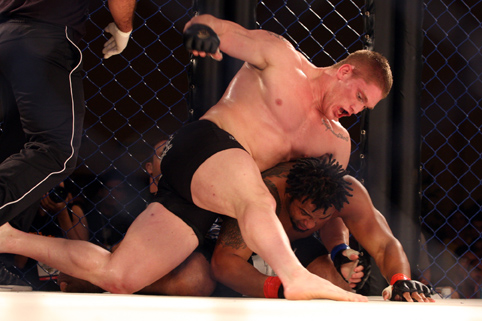 Once hot prospect Todd Duffee has been match against King of the Cage veteran Nick Gaston for an upcoming Dream event. The card, which takes place on July 16, will feature the finals of the Bantamweight Japan Tournament.

After winning his first five fights by knockout, including a second-round victory over UFC veteran Assuerio Silva, the UFC extended Duffee an invitation. In his promotional debut, he set the record for fasted knockout in UFC history with a seven-second dispatching of Tim Hague.

Duffee then shockingly fell to Mike Russow at UFC 114. After dominating the fight, Russow landed a knockout blow with less than three minutes left in the fight. In his next fight, he challenged Alistair Overeem for the vacant-interim Dream heavyweight title, but Duffee lasted only 19 seconds against the K-1 World Grand Prix champion.

Since making his debut against former NFL player Michael Westbrook in a fight that ended in a no contest, Gaston has won five-straight fights. During his string of victories, he scored a second-round TKO over UFC veteran Darrill Schoonover. This will be his first fight outside of KOTC.

Gaston has been featured in two episodes of the reality show “Bully Beatdown.”

FEG, the parent company of Dream and K-1, also announced that Atsushi Yamamoto has been forced to pull out of his third place bout against Kenji Osawa. ZST fighter Keisuke Fujiwara will step in to the contest.