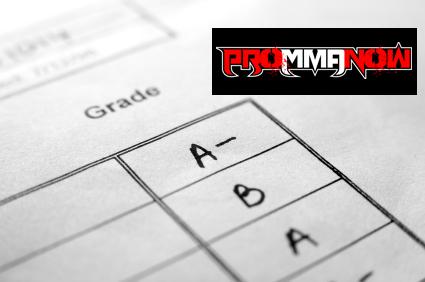 UFC 131 featured some great performances, and some that really should have been better. Now, it is time for the ProMMANow.com report card. Some fighters will have a nice shiny “A” for their refrigerator, while some might try to make a “D” look like a “B.”

Michihiro Omigawa (B-)
It should be clear to anyone with a pulse that the judges are the number-one reason that Omigawa did not walk out of the cage with a victory. However, he is still downgraded for his striking style. Over the course of his career, he has worked diligently to develop a peek-a-boo boxing game. It was working great against Elkins, but he could have been much more aggressive with his counters after Elkins missed. If he had picked up the pace, he might have even scored a finish.

Darren Elkins (C+)
Omigawa relies on getting the top position and striking on the feet. Elkins was the better wrestler, so why did not continually work for takedowns? After Bruce Buffer announced the scorecards, he looked like a woman from the Lexus commercials who finds a car with a big red bow on it.

Joey Beltran (C-)
As Joe Rogan said about 100 times, “Beltran is tough as nails.” He needs to be, because he does not fight with a strategy. He comes out and throws and hopefully the other guy goes down. This time, Rosa went down.

Aaron Rosa (D)
It is clear that Rosa is not a heavyweight. Normally, it is a smart move to bump up the heavyweight division because the talent is weaker. However, Rosa looks terrible with the extra weight, and if you are not going to beat Beltran there really isn’t a future for you in the division. “Big Red” needs to get serious and get back down to 205 pounds.

Dustin Poirier (A)
“The Diamond” proved that he is not a one-hit wonder in the featherweight division. He was able to survive against a technically sound striker and score with his own strikes. Poirier also got a chance to show that he has a well rounded game. Most importantly, he held onto his top-ten spot with a unanimous-decision victory.

Jason Young (B+)
In his early career, it appeared as if Young’s ground game would continually get him into trouble. However, he survived diligently against Poirier. On the feet, his persistent leg kicks did a ton of damage. Going into the card, it seemed like Young would lose a few fights and be out of the UFC. Now, it he is a guy a lot of people want to see back.

Nick Ring (B+)
After being thoroughly outgrappled in his UFC debut, Ring got to show off some of his own ground chops on Saturday night. He was simply better on the floor than Head. These are the kind of performances that make people excited about a prospect.

James Head (C+)
Head got an invite to the UFC after defeating UFC veteran Gerald Harris, but he did not look spectacular in the fight. He mostly laid on his back and scored with elbows. In this fight, he showed that he is a game fighter that is improving. His defensive grappling will need to continue to improve if he wants to keep a spot in the promotion.

Krzysztof Soszynski (B+)
Very few fighters in MMA improve as much as Soszynski. If you don’t agree, go back and watch some of his IFL fights at heavyweight. His takedown defense was on point, and he was able to pick apart Massenzio on the feet. Very solid performance from the “The Polish Experiment.”

Mike Massenzio (C-)
Massenzio misses out on a D, because he took this fight on extremely short notice, and he is not a light heavyweight. He is a solid wrestler and top-position grappler. However, he does not have very much striking to set up his takedowns. Massenzio took shots from extreme range without any set ups, which was not effective.

Jesse Bongfeldt (C)
Bongfeldt got worked over on the ground, but he did enough to survive. After getting back to his feet, he submitted to a standing guillotine with less than 10 seconds left in the round. There are a variety of ways to escape that hold. With Weidman’s knee injury he might have been able to off the upset if he held on for a few more seconds.

Chris Weidman (A)
It is always scary when a high level wrestler picks up the submission game as quickly as Weidman. Bongfeldt may not be a top-ten level fighter, but he does hold wins over T.J. Grant and Sean Pierson, two prospects who use a lot of wrestling. The only criticism that could be leveled at Weidman is, it might not be smart to advertise a long standing knee injury when you fight in Anderson Silva‘s division. Also, never tell an insurance company it is a preexisting condition.

Sam Stout (A+)
It seemed a bit odd that Stout decided to come out to Eminem’s “Go to Sleep” considering during his 10-fight UFC career, he had scored exactly zero knockouts. That changed in a big way Saturday night. He caught Edwards with a huge counter and took home a little extra coin for his efforts.

Yves Edwards (C+)
Before catching the knockout blow, Edwards looked strong. He used his reach effectively and even took the fight to the ground where he had a big advantage. It is hard to watch a guy get knocked out after putting on a solid performance early.

Donald Cerrone (A-)
So far in his Zuffa career, “Cowboy” has often fallen behind early in fights and then had to fight his way back. In this contest, he came in with a strategy and was able to stick to it through all three rounds. On top of that, Cerrone’s defensive wrestling has always been a weak part of his game. Against Rocha, he did a fine job of staying out of trouble. After the fight, he apologized for not scoring the finish, but this was still a step forward for the advancement of his career. The only negative aspect of the fight was that, despite owning the striking, he still could not avoid Rocha’s telegraphed right hand. Striking defense is the hardest thing for MMA fighter to pick up.

Vagner Rocha (D)
Rocha’s performance made it clear that he is not a UFC level fighter at this point. He seemed like he wanted to rely on his grappling ability, but his wrestling made Cerrone look like Dan Gable. He did score with some hard right hands. However, he will need to focus on improving his ability to get the fight to the ground. There is not a problem with trying to pull guard, but Rocha’ atomic butt scoot was not going to work.

Jon Olav Einemo (C-)
In some ways, Einemo was impressive. His striking looked greatly improved from his Pride FC fight against Fabricio Werdum in 2006. However, he continually fought to get the Thai clinch and then stopped to eat knees to the face. It almost looked like he was trying to hurt Herman’s knee with his orbital bone. At the end of the first round, he showed that he could get takedowns. He needed to stick to that strategy to win the fight. Instead he got sucked into a striking game and ended up on the losing end of a TKO.

Dave Herman (C)
People seem to have enjoyed Herman’s fight from Saturday night. However, he was inches away from repeating his performance against Mu Bae “The Heavy Tank of Busan” Choi. Einemo had not fought in almost five years, and is barely an MMA fighter let alone a striker. Herman has the kind of athletic ability to make it to the top of the heavyweight division, but fights like this are not going to get it done. He nearly got pounded out by a guy known for his grappling. Imagine what would have happened if he had fought someone with any kind of striking background.

Demian Maia (B+)
The response to Maia’s improved striking game is somewhat puzzling. Do people not remember that he beat up Dan Miller on the feet en route to scoring a decision victory? Anyway, Maia looked about as good as someone can in a loss. Normally it is both cliche and false to say “it could have gone either way,” but in this fight it is actually true.

Mark Munoz (B+)
Munoz did a great job coming back after dropping the first round on any sane person’s scorecard. He has added some strong submission defense to his wrestling game. Without that, he certainly would have been submitted. Despite the victory, his striking defense remains a large hole in his game. He needs to work on his reaction to getting hit if he going to take on a heavy puncher like Brian Stann.

Kenny Florian (B-)
Surly the narrative will be that Florian looked great at his new weight class, and he is now the man to challenge Jose Aldo for the featherweight title. However, is that really what happened? He started off very slowly and got put on roller skates twice by a guy who is known for his kicks. This was not the same Florian that best Clay Guida and Takanori Gomi. If he fights like that against Aldo he might not make it to round two. He did even his record against dudes name Diego, which is nice.

Diego Nunes (B-)
Historically, mediocre lightweights have dropped down to the featherweight division and made a huge impact. (see Michihiro Omigawa, Manny Gamburyan and Mike Thomas Brown) So, in theory, Florian should have been able to easily dominate Nunes. That was simply not the case. Nunes used his normal kicking game, effectively used his hands and showed off an improved grappling game. However, it was not enough to take the decision

Junior dos Santos (A+)
The only thing pundits have been able to nitpick when it comes to “Cigano” is his wrestling game. Up until this point, he had never faced a guy who was actively looking to take the fight to the ground and had the skill to do it. He showed that his game is truly complete, and his performance should make his upcoming title fight against Cain Velasquez that much more intriguing.

Shane Carwin (C)
Despite being basically outclassed, it is hard to really criticize Carwin’s performance. He was simply bested by a better martial artist. The former NCAA champion earns some points for answering two big questions about himself. He showed a great deal of grit and determination coming back from that firestorm at the end of round one. Even though he was not throwing a ton of shots, his gas tank did not fail him the way it did against Brock Lesnar.