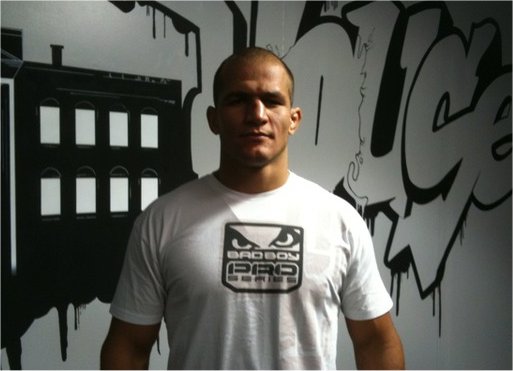 In almost any sport, speed kills.

Junior dos Santos showed Shane Carwin up close what speed can do, as he battered Carwin over three rounds in a one-sided affair that will now earn him a shot at UFC Heavyweight champion Cain Velasquez.

“Cigano” nearly finished the fight in the opening frame, landing a flush right hand, then a staggering left hook that dropped Carwin to one knee. Dos Santos followed up with a flurry of rapid-fire left hands to the face of Carwin who continued to defend with his left arm trying to survive the first round.

After it was apparent that a referee stoppage wasn’t coming, dos Santos stepped back to prevent punching himself out as the last few seconds ran out on the opening round.

The corner of Carwin worked feverishly to stop the bleeding from Carwin’s battered nose, as well as cuts under both eyes. Carwin showed the toughness and heart of a champion, making his way back out to the center of the cage for the second round.

Dos Santos wasted little time in the second, implementing his jab immediately, and after it was apparent that the take downs of Carwin would be ineffective, he settled in to a boxing match, mixing up his jab with lead left hooks and shots to the body.

Carwin had no answer for the speed of Dos santos, and in the third and final stanza, “Cigano” closed the round with a couple of big take downs to round out a dominating performance.

The one-sided beat down by dos Santos earns him a shot at UFC gold against current Heavyweight champion Cain Velasquez. Although dos Santos clearly respects Velasquez, he had a few words for the champ.

“Much respect for Cain Velasquez, but Cain, I’m coming for you,” said Dos santos.

Diego Nunes proved to be a worthy challenge for Kenny Florian in his debut at featherweight, but by the second round, Florian established control of the bout, walking away with the unanimous decision victory that gets him one-step closer to his desire to fight Jose Aldo.

Nunes mixed up his strikes well in the opening round, using his speed to land first in most of the early exchanges. Florian had difficulty getting Nunes to the mat to start, as Nunes showed great balance and strength to keep the fight on the feet.

It would be Nunes that would get the take down early in the second round, but in true Kenny Florian fashion, elbows and strikes from his back started to take their toll on Nunes.

Florian would make his way back to his feet, and then start to find his rhythm standing before taking Nunes down late and landing punches from the top to end the round.

The third round was all Florian until the very last second, when Nunes landed a right hand that dropped Florian to one knee at the bell. It was too little, too late for Nunes, as Florian won on all of the score cards (29-28, 29-28, 30-27).

Most fans figured Mark Munoz would have a decided stand up advantage against Demian Maia coming into this bout.

Maia showed a marked improvement in his striking, seeming to catch Munoz off guard, but the former national collegiate champion found away to outwork Maia en route to a unanimous decision victory.

Maia gave Munoz fits in the opening frame, landing cleaner and more frequently with his punches, and after one round, Maia appeared to be easily ahead on the score cards.

Munoz started to find his rhythm in the second round, forcing Maia to look to get the fight to the mat. Maia dove for multiple single leg attempts, but Munoz made him pay for his efforts, peppering his body with big right hands from the top. Maia resorted to trying to pull guard after his take down attempts proved to be ineffective, but Munoz showed great control from the top.

The take downs came more easily for Munoz in the final frame, but Maia put Munoz in danger against the cage as he locked up a crucifix from the back of Munoz and started to torque for a submission.

Munoz recognized the danger and quickly turned into Maia, standing back up and away before going back to work on his feet. Maia’s shots continued to fail late in the third, and Munoz closed out the fight in total control of the bout.

When the scores came in, they were all in favor of Munoz (11-2), who notches his third consecutive win in the Octagon.

Dave “Pee Wee” Herman and Jon Olav Einemo decided to give the fans a slugfest at UFC 131, but it was Herman that ended the party early, putting Einemo away by TKO in the second.

After a back-and-forth first round with little defense from either guy, Einemo landed a crunching knee to the jaw of Herman, backing “Pee Wee” up toward the cage. Herman appeared hurt, but then immediately came forward, landed a kick to the body, a knee to the face, and then a right hand that dropped Einemo.

Einemo survived the onslaught, but the end came quickly after, when Herman landed a staggering left hand that dropped him against the cage. Herman wasted little time going for the finish, landing unanswered hammer fists from the top, forcing the referee stoppage.

Rocha had said coming in, that he would win by submission, but Cerrone’s continued improvement in his take down defense ensured that the submission game of Rocha would be a nonfactor in the bout.

Once the fight was relegated to a stand up battle, Cerrone blistered the legs of Rocha with an onslaught of kicks throughout the bout. Between rounds one and two, Rocha was already limping coming out of his corner.

Cerrone was unable to put Rocha away in the third, as Rocha tried his best to pull guard and avoid any more punishment to his legs. After the bell sounded on three rounds of action, Cerrone (15-3 MMA, 2-0 UFC) was awarded a lopsided unanimous decision victory (30-27, 30-27, 30-27).