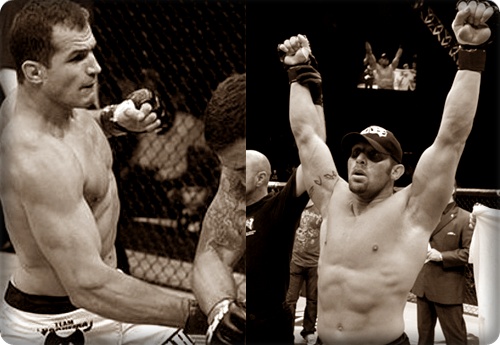 The main event of UFC 131 features a heavyweight matchup between Junior dos Santos and Shane Carwin.

This will be a huge matchup with the winner getting the opportunity to face UFC heavyweight champion Cain Velasquez later this year.

Shane Carwin comes into this fight with an overall record of (12-1) with 7 wins via TKO/KO. Carwin was last in action against the then current champion Brock Lesnar, losing via arm triangle choke after dominating the first round. Carwin has since been out with injuries and has had neck surgery during this time, so it’ll be close to a year since Carwin has stepped inside the cage when he does so this weekend. Carwin has huge power in his hands and is an accomplished amateur wrestler, but rarely uses that skill in his fights as he prefers to stand and strike. Carwin has never let a fight go to the judges and this one will be no different.

Junior dos Santos comes into this fight with an overall record of (12-1) with 8 wins via TKO/KO. Dos Santos was last in action against Roy Nelson last August winning a dominant unanimous decision. Dos Santos also has huge power in his hands, but is also the best boxer in the heavyweight division. No one has been able to take Dos Santos down and keep him there, but he’s a brown belt under the Nogueira brothers so he has to at least be decent on the ground.

This fight is not going the distance and I will almost guarantee that somebody will get knocked out in this fight. The only unexpected thing I see coming in this fight is Carwin possibly looking to take Dos Santos down with his wrestling skills. Carwin has pretty much abandoned his wrestling in favor of knocking people out during his UFC stint, but this is the most important fight of his career and I think he’s going to do everything in his power to win this fight including going for takedowns. If Carwin can’t take Junior dos Santos down, he only has a puncher’s chance of winning this fight. and should attempt to put Dos Santos against the cage to fire off some punches while in close range. He could land that magical punch like he did against Gabriel Gonzaga because he has huge power, but I just don’t see it happening for him.

Junior dos Santos is light on his feet and has very good hand speed for a heavyweight, and his movement plus hand speed is going to give Carwin problems. Dos Santos has shown the ability to get right back up to his feet when taken down, and he’ll be looking to do that if Carwin is successful there. It’s smart of him to avoid playing the guard game as a heavyweight, not to mention he doesn’t want to be under those lunchbox fists of Carwin. Dos Santos loves to throw the right uppercut and left hook and those are his money punches. Carwin has a habit of dropping his hands, especially after throwing the that big right hand of his. I look for Dos Santos to counter that with the left hook to hurt Carwin then put him away via TKO.