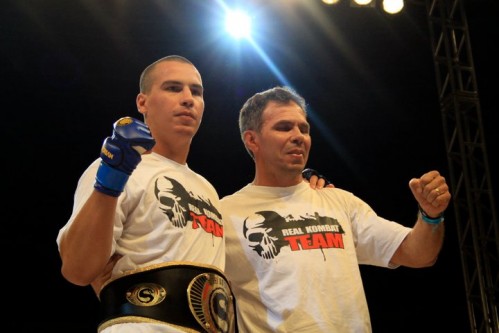 Sherdog has reported that top Brazilian prospect Carlos Augusto “Guto” Inocente has a date set for his Strikeforce debut. He will meet Lionel Lanham at Strikeforce Challengers 17, which takes place July 22 at the Palms Casino Resort in Las Vegas.

After a decorated kickboxing career, Inocente converted to MMA in 2005. He has won all five of his MMA fights via stoppage. In his last fight, he knocked out Argentina’s Gustavo Moia in only 40 seconds to claim the Shooto South American 220-pound title.

According to the Sherdog report, this will be the first fight on Inocente’s six-fight contract with Strikeforce.

Lanham, a training partner of UFC veteran Keith Jardine, will bring a 3-0 record into the card. Interestingly enough, he defeated a fighter named Guto Feliciano in his professional debut. In his last fight, Lanham knocked out Eric McElroy in only 14 seconds at Shark Fights 15.

A welterweight contest between Bobby Voelker and Roger Bowling will headline Strikeforce Challengers 17. A 135-pound women’s contest featuring Sarah Kaufman and Liz Carmouche has also been reported for the upcoming card.