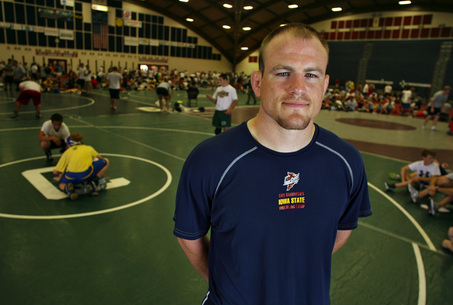 Both InterMat and FloWrestling have reported that Olympic champion Cael Sanderson will return to action at the 2011 U.S. World Team Trials at 84 kg. The event is scheduled for this weekend in Oklahoma City, Okla.

Despite these reports, Sanderson is not registered on TrackWrestling.com, the bracket service used by USA Wrestling for these events.

Sanderson has only entered one tournament since winning a gold medal at the 2004 Olympics. He easily won the Northeast Regional back on March 26. He won the 96 kg bracket with a 6-0, 6-0 victory over Jack Jensen in the final match.

The Olympic champion will need to win the challenge tournament in order to earn a shot at 2009 World silver medalist Jake Herbert who won the U.S. Open earlier this year.

Sanderson went 159-0 over his four years as a wrestler at Iowa State. He won four NCAA Division 1 titles and four Big 12 titles. This weekend, he will also enter the National Wrestling Hall of Fame.