Will this guy be the next Ultimate Fighter? 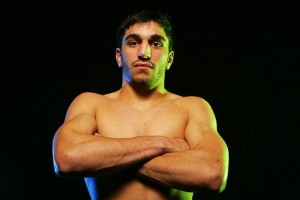 The event will broadcast LIVE on Spike TV. The two TUF 13 contestants will be competing for the traditional prize of a six-figure contract with the UFC.

Ramsey discusses his time on the show and gives his thoughts on Ferguson, who caused quite a bit of tension among his teammates when he made comments about Charlie Rader‘s family.

Ramsey also talks about his friend Court McGee, who won the 11th season of The Ultimate Fighter, and the effect he had on him trying out for the show.

Oh yeah, nicknamed “Stripper Ramsey” by his teammates for his inclination toward public nudity, Nijem explains stripping is not something new for him but is something that often happens when his family gets together. But he has not done any professional stripping, mostly amateur.

Although from Utah, Ramsey seems like a character right out of “The O.C.” He’s extremely comfortable in front of the camera and definitely belongs on a teenage dramedy. If this kid does end up winning The Ultimate Fighter, I think the UFC has probably found their next star.

One thought on “Will this guy be the next Ultimate Fighter?”