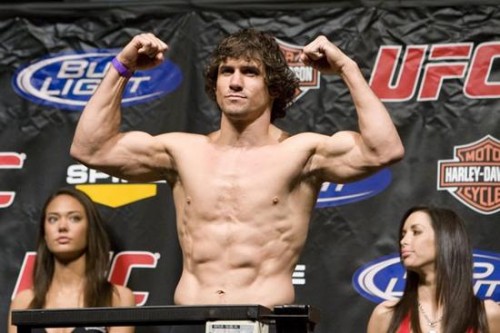 Former Arizona State wrestler Aaron Simpson was set for the highest profile fight in his career against Jason “Mayhem” Miller. However, as a true television starlet, “Mayhem” is getting the TUF treatment. Now, Simpson will take on TUF veteran Brad Tavares at UFC 132.

The card takes place on July 2 at the MGM Grand Garden Arena in Las Vegas. The main event is a battle for the UFC bantamweight title between champion Dominick Cruz and former WEC featherweight champion Urijah Faber.

In his last fight, Simpson stopped a two-fight losing skid with a unanimous-decision victory over Mario Miranda. The win improved his professional record to 8-2. He also holds victories over Tom Lawlor and Ed Herman.

Tavares reached the semifinals of the 11th season of “The Ultimate Fighter” before losing to eventual champion Court McGee. Since the show, he has won back-to-back fights in the UFC against Seth Baczynski and Phil Baroni.