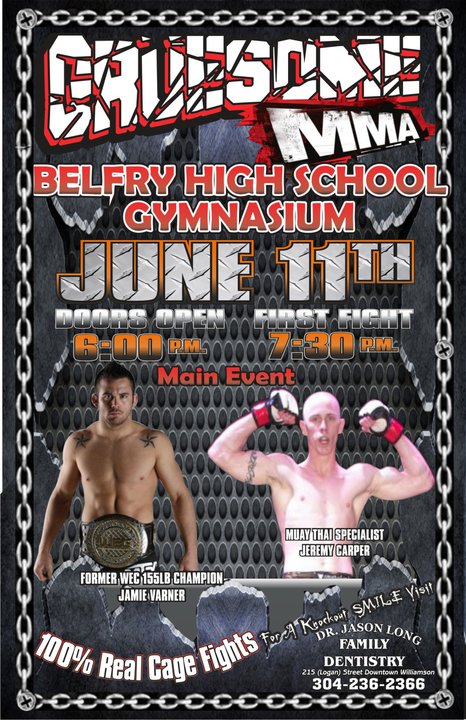 Varner is stepping in for Carper’s originally scheduled opponent, Rafaello Oliveira, who got an invitation to the big show to face Gleison Tibau this past weekend at UFC 130.

Varner is coming off a very impressive first round technical submission of Tyler Combs at XFO 39 in Chicago earlier this month. It was his first fight outside the Zuffa umbrella in over five years.

It is no secret Varner is on a mission to work his way back to the UFC, and the next stop on that train will be against Carper, who has spent the majority of his brief MMA career fighting for the Valley Fight League in Pennsylvania.

“Im excited about fighting for Gruesome MMA, this is an emerging fight promotion that is quickly growing. Its an honor to be on their roster as a featured fighter. Can’t wait to entertain our fans!”

No doubt Carper is being thrown into the deep end of the pool with the chance of a lifetime. The danger for Varner will be in not overlooking a relatively unknown opponent with nothing to lose.

For more information about Gruesome MMA as well as ticket info check out their website at www.gruesomemma.com.

Also, for those who can not make it to the live event, Go Fight Live (www.gfl.tv) is scheduled to broadcast the event LIVE via online pay-per-view.

The complete fight card is as follows: