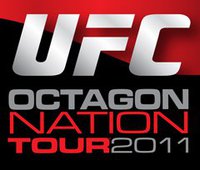 The UFC Octagon Nation Tour will be will be rolling into a city near you this summer on a fully-customized 18-wheeler truck with two Octagon-sized tents containing the ultimate experience for any UFC fan.

The UFC Octagon Nation Tour will be present at such popular events as the Bonnaroo Music Festival from June 9-12, the Summer X Games and the Quicksilver Pro. The tour will even make a stop at Times Square on June 25, where special activities and surprise fighter appearances will take place..

The tour features autograph signings with top UFC stars, a UFC Xbox station, and a pop-up retail store where fans can purchase the latest UFC merchandise. In addition, fans have the opportunity to visit an exhibition truck dedicated to showcasing rare UFC memorabilia such as Royce Gracie’s autographed Gi and Georges St-Pierre’s fight shorts.

The UFC Octagon Nation Tour also has several fan interactive features including physical fitness tests (weigh-in, high jump, pull-up bar and a punch strength station) where visitors receive a fight card with their results which can be instantly shared on their Facebook page, and those with top results will be posted to UFC.com/tour.

“I’ve always said that the UFC live experience is the best in all of sports. With the Octagon Nation Tour, we are going to bring the fastest-growing sport in the world to some of the best events of the summer. We’re excited to hit the road and give fans the opportunity to check it out.”

*All dates and stops subject to change*