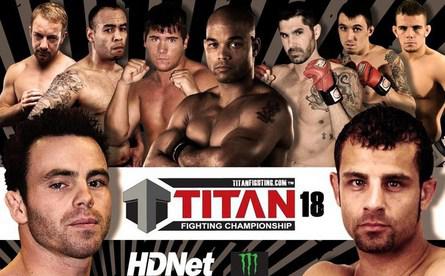 Also, the Rosholt brothers will be fighting on the card. Jake Rosholt (10-3), a UFC vet, will face Missouri’s John Ott (8-8) in a 200-pound catchweight bout, while his brother Jared Rosholt (2-0), a.k.a. “The Big Show”, will take on another Missouri fighter in Kirk Grinlinton (2-2) in heavyweight action.

Titan FC 18: Pulver vs. Davidson will air LIVE on HDNet starting at 10 p.m. ET.ProMMAnow.com will provide LIVE results and play-by-play commentary of all the main card action.

Michael Schiavello and Frank Trigg are calling the action tonight on HDNet. You can follow these guys on Twitter @SchiavelloVoice and @FrankTrigg.

Round 1 – Ripley shoots, gets the easy double leg takedown, lands in side control. Ripley gets full mount, Wilson gives up his back and Ripley locks in the body triangle and is looking for the choke. Ripley with punches to the side of the head, slips off the top and ends up on his back, throws up an armbar, Wilson slams him loose. Wilson goes for a toe hold, they roll but Ripley taps out to the complete silence of the crowd. I don’t think anyone even knew what happened.

Round 1 – Zengin with a left jab, overhand right, jab. Big leg kick from Wilk. They tie up, knee from Wilk. Again. More knees to the thighs. Dirty boxing from Zengin, punches to the  body. They continue to struggle in the clinch until Wilk trips Zengin onto his back. Wilk on top in half guard. Knee to the gut from Wilk, uses his forearm across the face, drops it down on his face. Wilk stands up and dives in with a punch. Zengin gets to his knees and Wilk locks on a D’arce, they roll and Zengin taps out.

Round 3 – Budig comes out aggressive landing some nice shots. Cooper grabs a tie clinch and lands a knee, Budig chases him down with more shots, he lands another knee to Budig’s face but does no real damage. Leg kick from Cooper. Left jab from Cooper, again. Right hook from Budig. Big leg kick from Cooper. One, two combo from Cooper, leg kick. Budig’s eye swollen shut now. Cooper has just picked him apart this whole fight, but Budig is still there swinging, although he has slowed down quite a bit. Leg kick from Cooper. Budig limping, bleeding out his nose. Right counter from Cooper, big leg kick. Inside leg kick and he just dodges almost everything Budig throws and Budig just can’t adjust. Stiff left jab and a straight right from Cooper. Great showing from “Super Duper” Bobby Cooper. ProMMAnow.com scores the round 10-9 for Cooper and the fight 30-27 for Cooper.

Round 1 – Rosholt is the huge favorite. Nice leg kick from Kirk but he eats a counter punch. He lands punch of his own though. Leg kick from Kirk. Nice right hand from Kirk turns Rosholt’s chin over. Enough of that, Rosholt shoots, puts Grinlinton on his back, mounts him and pounds him out. That’s all folks…. just like that. He took a few shots at first but as soon as he decided to take it down, it was just a matter of time. His brother Jake gives a thumbs up from the locker room.

Round 1 – Fans will remember John Ott as the guy who fought Bobby Lashley and Brian Imes in his last two bouts. Leg kick from Ott, punches, shoots on Rosholt puts him against the cage. Leg kick from Rosholt, Ott catches a kick from Rosholt and puts him on his back but he gets right up, shoots, stuffed. Right hand from Rosholt, right hand from Ott. Nice left hook from Rosholt. Ott shoots, Rosholt turns him on his back, gets side control, then full mount. Ott tries to hang on and get a stand up but Rosholt lands some shots and a big elbow that cuts Ott immediately. More elbows from Rosholt, using them like a Ginsu knife. Ott swinging off his back. Rosholt with another big elbow. More punches and elbows from Rosholt. ProMMAnow.com scores the round 10-9 for Rosholt.

Round 2 – Ott attaacks with punches and a kick but nothing lands much. Big leg kick from Rosholt. Another leg kick from Rosholt, checked by Ott. Rosholt with the takedown, lands in side control. In perfect position for elbows and he goes to work on Ott’s head with five elbows. Knee on belly, Ott sweeps and gets up but Rosholt lands a big shot and takes him right back down. Rosholt on top in half guard. Elbows to the thigh from Rosholt. Ott just resting it seems. Ref calls for action. Rosholt gets full mount with 1:19 remaining in the round. Rosholt moves back to half guard as it looks like he’s trying to set up a submission. Ott lands some hammerfists off his back. ProMMAnow.com scores the round 10-9 for Rosholt.

Round 2 – Superman punch to takedown from Rosholt. Lands an elbow and opens Ott up his cut right away. They are back to their feet and Rosholt is smashing him with several big punches, head kick, more punches and Ott goes down. Rosholt takes top position but the ref stops the action to check on Ott. His face is a bloody mess, looks like a horror movie. The ref lets it go though and Ott says he’s okay. They don’t even wipe his face. Ott’s face is completely red. Left hook from Rosholt. Leg kick from Ott. Nice left from Ott. Stiff jab from Rosholt.  Rosholt may be feeling a bit sorry for him here. Ott shoots for a single, Rosholt puts him down, puts a knee into his gut and a pool of blood forms on the ground. Rosholt is on top in half guard, lands a couple elbows. Rosholt lands a knee to the face while Ott was on the ground. Ott stands up and walks around wobbly — look he may really be hurt here, but to me it looked like he was playing it up a whole lot. Whatever the case it looks like they have waved the fight off and Rosholt will be DQ’d. Ott’s face is cut up badly. He is back up now and seems okay. What a crappy ending and a terrible way for this fight to end. Rosholt had this fight won. This can be compared to the way Jon Jones lost to Matt Hamill.