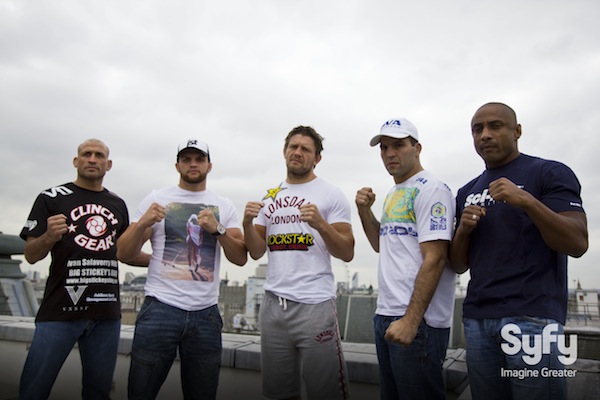 A press conference was held at this week at Lillywhites, London for the upcoming BAMMA 6 event which takes place at Wembley Arena this Saturday, May 21, and will air LIVE on Syfy at 9 p.m. For the complete BAMMA 6 fight card see ProMMAnow.com’s Upcoming Events page.

BAMMA CEO and Executive Producer David Green made the announcement that BAMMA 7 will take place at the NIA Arena in Birmingham on Sept. 10.

John Phillips – “I suppose it’s a bit unpredictable with the flights, but we’ve all made the effort and we’re all here today.”

Everyone saw the back and forth on twitter between Phil Baroni, Tom Watson and Matt Ewin. Considering that you’re both sitting here today, have you been able to resolve your issues at all?

Matt Ewin – “I don’t feel anything about him at all. At the end of the day, I hope that we’re going to fight and we’ll see from there”

Tom Watson – “ I don’t really want to fight him. I’ve got my opponent on Saturday and that’s Ninja Rua. That’s what 100% of what my attention is on. I’m focusing on that”

This is your first fight in England since 2007. How happy are you to be fighting back in the UK?

Ninja Rua – “I’m so happy to be fighting in England. I love it here. I train very hard and I’m ready to go on Saturday.”

I’ve been told that Tom Watson has also said that he’s not interested in a re-match with you either. How do you feel about that considering what happened in your first fight?

John Phillips – “I think every fighter that has a loss to someone wants to avenge that loss. Tom is where I want to be right now and most importantly, I want to get the rematch. Somewhere down the line I think that’s going to happen.”

What’s it like to be fighting in the UK and fighting amongst some of the most passionate fans in the world?

Ivan Salaveryy – “It feels great to be fighting here for the UK audience. Obviously being around talented athletes as these guys here is great. I can’t believe I’m fighting in Wembley Arena. It’s incredible.”

You had quite a serious elbow injury going into this fight. Has it healed up?

Tom Watson – “I had surgery in January and I’ve still got scars on both sides. I wouldn’t fight if I wasn’t 100%. Mixed Martial Arts is a tough sport and a lot of fighters get injuries. I’m ready to go and I feel good, so let’s do it.”

Obviously you guys have been out of MMA for quite a while. Are you nervous to be returning to the cage in such a big arena?

Matt Ewin –  “Of course I’m nervous. I’m fighting Ivan Salverry. You get nervous with every fight, but as soon as the bell goes, everything leaves and that’ll be it.”

Ivan Salaverry – “Not really. To be honest, I’m really anticipating a great grappling match if anything. I’ve heard so match about his skills, and see him. I can’t wait to roll”

Obviously you’re the Middleweight champion and there are a lot of middleweights here today.  How does it feel to have so many targets on your back?

Tom Watson – “Obviously, a lot of people want to fight for a title,  and I’m the champion. That’s the position I’m in at the moment and I don’t plan on losing, so bring them on.”

Was there anything in particular that affected your decision to return from retirement?

Ivan Salaverry  – “It was the excitement of fighting to be honest. It was wonderful to get a call from BAMMA to fight in Wembley Arena.  UK MMA is growing leaps and bounds. It’s definitely going to be an exciting event.”

Obviously, Tom trains at the Jackson camp and he also trains with Jon Jones, the man who beat your brother. Do you think that the Greg Jackson and his guys have something up there sleeve for you as well?

Ninja Rua – “Actually, I think that Greg Jackson has a good camp, and they probably do have some tricks up their sleeve. I like challenges, that’s what moves me. I had a great training camp and I’m ready for whatever situation that may come. I promise a good show for everyone.”

When you retired in 2008, you said that you wanted to focus on your gym. I was wondering what brought you back to fighting after all these years?

Ivan Salaverry – “You miss it. You really do. The cage calls on you. The crowd, the cage, fighting with the guys, you just miss it all.

You’re a very popular fighter and have fans all over the world. Obviously you’re fighting in someone else’s backyard, so is it going to be strange for you to not be a crowd favourite at an event?

Ninja Rua – “I’m fighting for the fun of it and the experience, not just the fans. It will be easy.”

Davie Green – “ I think you’ll also be surprised at the Brazilian contingent coming to support Rua in the UK. We seem to have a lot of fans coming from that part of London’s community.”

MMA has grown a lot in the last 18 months. As a guy whose come up through the smaller promotions and is now headlining a main event in an arena. How have you seen the sport grow through your own experiences?

Tom Watson – “It’s great to see that the UK is catching up with the rest of the world. We’re getting our own shows over here at Wembley. We’ve got television and even Facebook. It’s worldwide coverage. BAMMA and making the right moves and I’m just pleased to be a part of it. Hopefully, on Saturday the fans will get a great show

During an interview, Frank Trigg stated that he’s looking to stand and strike with you. Do you feel that he’s being disrespectful of your power?

John Phillips – “At the end of the day, it’s a mixed martial arts fight. I’d be surprised if he didn’t throw a fight to be honest. I hope he does strike with me because it’s going to end up being a really quick night.”

Three of your 4 losses have come from foreign opponents. Is that a concern for Saturday night?

Tom Watson – Not really.  A lot of losses came early on in my career, when I was hardly grappling. I was taking fights against UFC and PRIDE veterans and training in a barn with a bunch of my friends. It doesn’t really concern me.  I know how to train now and I’m ready to fight in any area the fight goes.