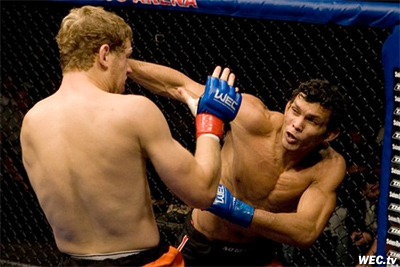 According to an MMAJunkie report, welterweights Luis “Sapo” Santos and Nicolae Cury have agreed to fight at Bellator 45.

“Sapo” picked up his 48th documented victory when he TKOed Dave Lehr Cochran last April. He is currently riding a five-fight winning streak and carries a 48-6 record. The Brazilian veteran holds victories over Jorge “Macaco” Patino and Daniel Acacio.

Cury has a background in both Brazilian jiu-jitsu and Judo. He was a five-time Brazilian national champion in Judo. He currently carries a 4-1 professional MMA record after making his debut at Elite XC “Heat” in 2008.

In the tournament finales, Patricio Freire will face off against Daniel Straus, while Richard Hale meets Christian M’Pumbu.