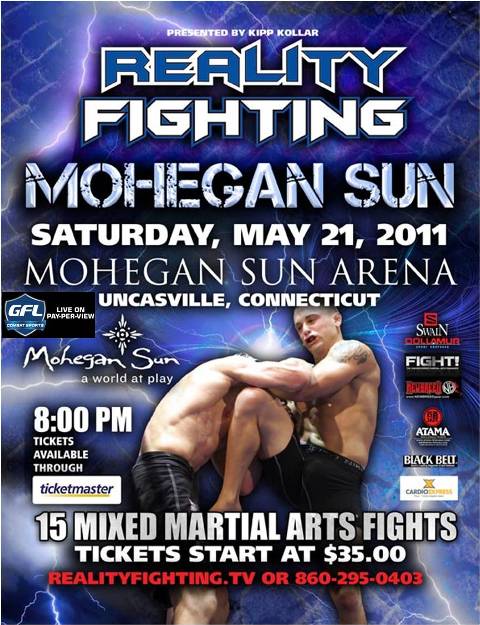 In the Women’s Superfight, Marianna Kheyfets of Danbury, CT., will take on Kaline Medeiros of Fall River, MA. Marianna trains out of American Top Team, is 2-0 and holds a submission victory over Kim Couture. Kaline, trains with Gillett’s MMA and will be making her pro debut after a stellar amateur career.

The Lightweight Superfight pits two fighters who are undefeated in Reality Fighting against one another. Joe Proctor who is trained by UFC fighter Joe Lauzon will go toe to toe with Underdog BJJ fighter Oz Pariser. Ryan Quinn takes on Joe McGann in a Welterweight Superfight. The American Top Team trained Quinn is coming off a dominant win at a recent Bellator fight held at Mohegan Sun. McGann trains with USMMA in Mass.

– GFL is a pioneer in Internet Sports Broadcasting. Over the years GFL has broadcast more than 1000 live events with over 5000 combat sports videos in 196 countries. GFL is especially proud to have served greater than 3.3 million public viewers over the years with more than 150 combat sports related website affiliates in its network.

Join us at: www.facebook.com/gofightlive or for press inquiries contact press@gfl.tv