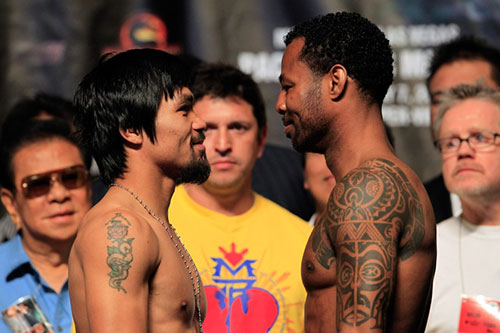 Now that I am done with school and literally a master of journalism, I figured it was time to start making snide remarks and posting them on the internet. Some people call this blogging. I call it a mishmash of thoughts that are not big enough to warrant full editorials or op-eds.

I know more about boxing than you
A lot of people sat at home on Saturday night and watched the big fight, and no, I am not talking about Rick Hawn vs. Jay Hieron (Sorry Bjorn). Free Saturday nights are rare in the MMA journalism world, so I went to hang out with my elementary school teacher/basement bum friend. Apparently, the fight was somewhat dull, because Shane Mosley decided to run from his brutal opponent. Naturally, fans and pundits were not thrilled by this strategy, and Twitter was on fire.

BloodyElbow’s Mike Fagan found it necessary to scold MMAJunkie’s John Morgan for complaining through social media. “I don’t feel sorry if you feel hoodwinked by last night’s main event. Complaining about the pedestrian performance of an 8-1 underdog is akin to complaining that Transformers 3 didn’t live up to your lofty expectations.” Does Fagan deserve a medal for predicting a boring fight after the fact? No. I knew George Bush was an idiot before he became president. Does that mean I can’t have a problem with waterboarding? No.

In true SBNation fashion, Head Kick Legend’s Matthew Roth could not wait to pat Fagan on the back for his “you don’t watch boxing, so you don’t know what you are watching” stance.

Henry Cejudo returns in a BIG way
At ProMMANow.com we try to keep our friends abreast of everything going on in all the combat sports. At least, that is what I like to say to justify my obsession with wrestling bleeding into MMA coverage. If you follow the site, you know that 2008 Olympic champion Henry Cejudo has finally returned to action. He defeated a guy who placed fifth at the Russian Nationals, which is kind of a big deal. It is hard to not notice the fact that he looked huge compared to his opponent. I do not know how USA Wrestling handled the weigh ins for this event, but I would be shocked if Cejudo stepped on a scale at 55kg.

Frankie Edgar vs. Gray Maynard III is off
The news is pretty shocking. A lot of fights get ruined by injuries these days, but it is still rare to see a situation in which both fighters will be unable to compete. It could not have happened at a worse time either. A lot of folks were excited for this fight, because their second encounter was a “Fight of the Year” contender. Now, that shine will fade even more before the fight happens.

Also, you have to really feel for Anthony Pettis. He wins a fight with the promise of a title shot. Now, he has to beat Clay Guida and wait even longer than initially expected to earn that shot.