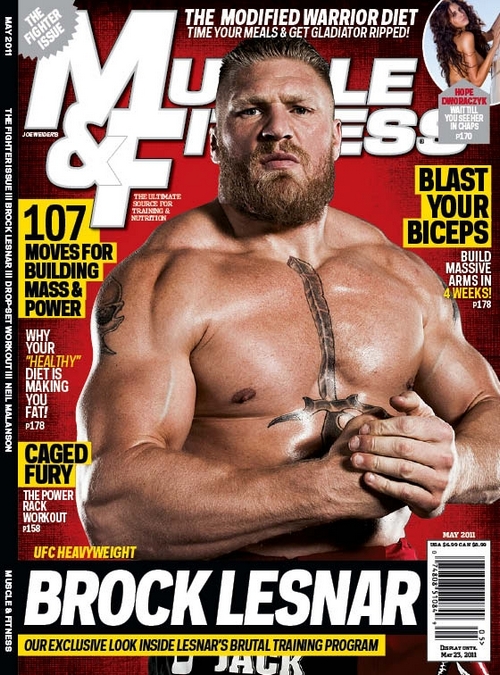 For all you Brock Lesnar fans out there, you are going to want to pick up a copy of the May issue of Muscle & Fitness which is currently at news stands.

This special “Fighter Issue” takes a look at the actual strength and conditioning program the former UFC heavyweight champ is using to prepare for his upcoming fight with Junior dos Santos.

Readers will also learn about the diet that changed Lesnar’s life and the supplements he takes that helped him regain the 45 pounds he lost during his bout with diverticulitis.

You will hear from Lesnar’s coaches and from Lesnar himself about his upbringing, the trials and tribulations he has faced, and the work involved as he seeks to regain the UFC heavyweight title.

In addition to Lesnar, the May “Fighter Issue” has a feature on Xtreme Couture head grappling instructor Neal Melanson, a Navy veteran who at one point went blind due to Behcet’s disease, but fought his way back to health and is now one of the most sought-after trainers in the business.

Melanson is also an author, a major health proponent and has a whole host of training DVDs on the market.

Also in this issue, you will learn about The Warrior Diet, The Power Rack Workout, how to use a heavy bag, how to build massive arms in four weeks, witness a smokin’ pictorial of 2010 Playmate of the Year Hope Dworaczyk, and much more!