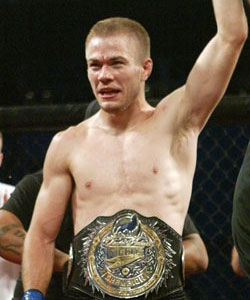 Norifumi “Kid” Yamamoto revealed on Twitter that he is pulling out of his scheduled fight at UFC 130. Over night, UFC officials announced that he will be against Chris Cariaso by top-prospect Michael McDonald.

“Kid” made his UFC debut against Demetrious Johnson at UFC 126. Johnson mixed his striking and wrestling effectively and scored a decision victory over the Japanese icon.

Before receiving a call from Zuffa, McDonald won three-straight fights under the Tachi Palace Fights banner. In his WEC debut, he submitted Clint Godfrey in less than three minutes. After the UFC absorbed the UFC, he made his UFC debut against Edwin Figueroa and won a unanimous decision.

Cariaso went 1-1 in the WEC before making the move to the UFC. In his promotional debut, he defeated Will Campuzano via decision at UFC Fight for the Troops 2.

Headlining UFC 130 is a lightweight title fight. Champion Frankie Edgar will defend the belt against Gray Maynard a second time. The two fighters fought to a draw back at UFC 125 in January.