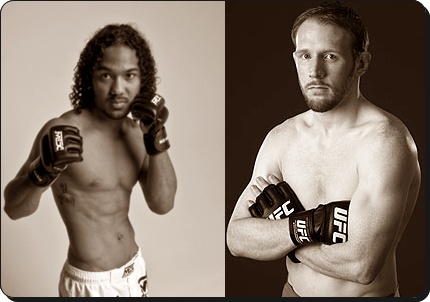 We’ll be previewing all 5 fights on the main card of the PPV broadcast this week. First up is former WEC lightweight champion Ben Henderson as he’ll be taking on UFC veteran and grappling ace Mark Bocek.

Mark Bocek comes into this fight with a career record of (9-3) with 7 of those wins via submission. Bocek is is a submission ace, having won the submission of the night award twice in the UFC. Bocek has improved his overall game since debuting at UFC 73 against current champion Frankie Edgar.

Ben Henderson comes into this fight after losing his WEC lightweight title in the last WEC fight ever against Anthony Pettis. Henderson has a career record of (12-2) with 8 wins via submission, notably using the guillotine for several of those. Henderson is an accomplished wrestler with improving striking ability, and good submission defense.

Linesmaker has Henderson as the betting favorite at (-140) and Bocek as the underdog at (+110).

Although both fighters are ever improving, I still think this fight comes down to a wrestler versus grappler showdown. Henderson is versed in submissions, but Bocek is clearly superior in that area so it’s probably in his best interest to use his wrestling in reverse and keep the fight standing. We’ve seen Henderson is some close submission predicaments before against the likes of Donald Cerrone. We saw Henderson lose positions on the ground against Anthony Pettis as well. I don’t think Henderson can afford to get into those situations against someone like Bocek on the ground. I think he’s technically superior to Cerrone and Pettis when it comes to jiu-jitsu.

This is a very tough fight to call in that we saw Bocek give rising contender Jim Miller all he could handle a little over a year ago, and he’s surely improved since then. Bocek is usually successful early on if he’s going to get the submission because he tends to fade as the fights goes at times. Henderson has really good cardio, so the longer the fight goes the more likely it is that he’ll take the win. I think Henderson will be able to keep the fight standing enough to stay out of danger, using those very good leg kicks he likes to throw to slow Bocek down. I think Henderson will edge Bocek via decision, but wouldn’t be surprised if Henderson took a chance in the fight while leaving an opening for Bocek to get the submission.

3 thoughts on “UFC 129 preview: Can Ben Henderson get by grappling ace Mark Bocek in UFC debut?”