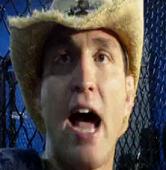 In this, his tenth year as a pro fighter, Jason “Mayhem” Miller will make his return to the UFC Octagon for the first time since 2005 when he takes on Aaron “A-Train” Simpson in a 185-pound match-up scheduled for July 2 at UFC 132 in Las Vegas.

UFC President Dana White confirmed Saturday that both parties had verbally agreed to the bout.

Miller (24-7, 1 NC) has spent the last couple of years fighting in DREAM and Strikeforce and contended for titles in both organizations. He is also the star of MTV’s “Bully Beatdown’ currently in its third season.

Simpson (8-2) won “knockout of the night” honors in his UFC debut against Tim McKenzie at UFC Fight Night 18 in April 2009.

He went on to win his next two fights against Ed Herman and Tom Lawlor before dropping back-to-back  decisions against Chris Leben and Mark Munoz in 2010.

Simpson bounced back in March of this year with a unanimous decision victory over Mario Miranda at UFC Fight Night 24.