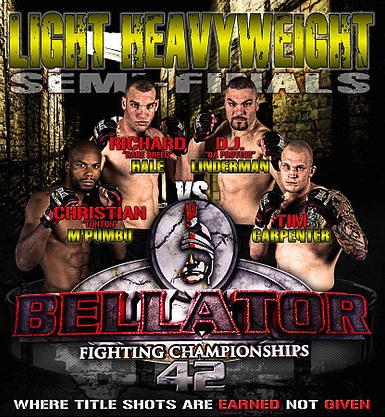 Round 2 – Spoon shoots, Nog defends well and never goes all the way down. Leg kick from Nogueira. Spoon misses with a big haymaker. Nog catches a kick and lands several punches to counter. They clinch and Spoon lands a couple elbows. Jab from Spoon, again and lands a big right. Nog with a counter right and uppercut that scores. Nog’s chin way up in the air. Body lock from Nogueira pushing Spoon against the cage. They separate and square up. Nice right from Spoon counters a shot from Nog. Nog definitely has the better stand up. Nice combo to the body from Nogueira. Spoon with a one two to the face. Nogueira gets the single leg takedown just a few seconds before the bell and lands a few shots to seal the round. ProMMAnow.com scores the round 10-9 for Nogueira.

Round 3 – Nog chasing Spoon down, big inside thigh kick, body kick, again. Leg kick caught by Nog and he shoots and gets the takedown. Spoon fishing for a kimura, gets to his feet. Nog with a body lock, lands a right left on the break. Spoon gets countered with a three punch combo, a flying knee but Spoon covers up. Uppercut from Nog. Nice right from Spoon scores. Spoon shoots, gets shrugged aside. Shoots again, gets the takedown but Nog bounces right up. Nice right from Spoon. Spoon shoots, Nog walks out of it. Spoon working a jab and landing. Nog shoots, picks Spoon up and puts him down but he gets right up. Nice straight left from Nog. Ten seconds to go and Nog lands a left but Spoon rocks Nog with a one two just before the bell, his best punches of the night. ProMMAnow.com scores the round 10-9 for Nogueira and the fight 30-27 for Nogueira.

Round 1 – Arocho lands a right and Mann slips to the mat but gets up. Head kick from Mann blocked and countered with a right. Mann with a front kick to the face slips over the shoulder of Arocho. Nice left hook by Mann and Arocho shoots, gets the takedown. Mann sweeps and puts Arocho on his back. Good stuff from the Brit. Who says they can’t wrestle? Mann on top now landing some nice elbows and big rights from inside Arocho’s full guard. Body body head from Mann. More elbows from Mann and Arocho doing little more than trying to hang on right now. Mann opens Arocho’s forehead up with an elbow. Arocho trying to hang on but Mann is staying busy here with less than a minute to go. More elbows and punches to the face from Mann. It’s a steady calculated beatdown from Mann. ProMMAnow.com scores the round 10-9 for Mann (Almost a 10-8).

Round 2 – Leg kick from Mann. Right hand from Mann. Barely misses a head kick. Same from Arocho. Mann just misses a big right. Arocho has big mouses under both eyes. Arocho shoots but ends up on his back with Mann inside his full guard. Mann goes back to that ground and pound we saw all through round one. Arocho’s left eye is almost swollen shut. Big left hands from Mann. He stayed on top for the rest of the round just pounding steadily away. ProMMAnow.com scores the round 10-8 for Mann.

Round 3 – Head kick from Arocho but does little damage. Head kick from Mann. Arocho shoots, eats a punch and ends up on his back underneath Mann again. Mann in side control, raining down elbows and Arocho’s face looks horrible. Elbow after elbow Mann lands to the face of Arocho. Mann turns north-south and locks on an inverted triangle briefly. Mann goes back to side control, knees to the ribs. Two minutes to go. Four quick elbows from Mann to the face. Arocho’s face bloody. Mann on top in half guard continues the beating. He attempts a keylock but lets it go due to his leg being stuck in half guard. Arocho gains full guard. Mann puts about five punches in the ribs of Arocho. The ten second bell sounds and Mann swarms. ProMMAnow.com scores the round 10-8 and the fight 30-25 for Mann.

Round 3 – Hale flies through the air. High kick misses. Leg kick from Hale. Nice left from Linderman, then shoots. Linderman picks him up but Hale grabs a guillotine and Linderman sets him down, he starts working again for the takedown. Clinched against the cage and Linderman falls to his back and Hale is on top. Linderman gives up his back and the black belt jumps on his back. Hale with both hooks in looking for the choke. One and a half minutes to go. Linderman throwing blind punches and lands. Linderman turtles up and Hale is riding him. Linderman throws punches, rights and lefts while still on Linderman’s back as time runs out. ProMMAnow.com scores the round 10-9 for Hale and the fight 29-28 for Hale.

NOTES: Hale will face M’Pumbu in the finals for the Bellator light heavyweight title.

One thought on “Bellator 42 LIVE results and play-by-play”