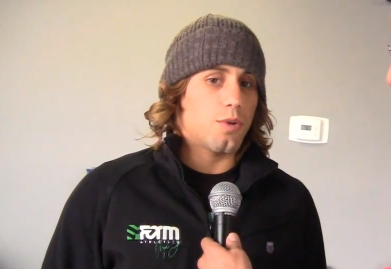 Team Lloyd Irvin’s Mike “The Hulk” Easton and current UFC 135-pound champ Dominick Cruz are not only teammates, they are friends.

That is why Easton, a bantamweight powerhouse in his own right, has not taken too kindly to some of the things Urijah Faber has had to say regarding Cruz, leading up to their scheduled rematch at UFC 132 on July 2.

In an interview on Nashville Sports Radio 560 WNSR’s the Afternoon Press Box on Wednesday, Easton had some words of advice for “The California Kid” and said he is pretty sure he and Faber are going to end up fighting one another:

“Mr. Butt-Chin talks a lot of trash about my boy Dominick Cruz and I don’t understand why. The more outstanding things Domo does, Urijah Faber just keeps on talking and talking and talking, well we’re going to find out on what, Fourth of July right, Fourth of July weekend. Yeah we’re going to find out. I know for a fact Urijah Faber going to eat them words man. He’s going to eat those words. He’s got diarrhea of the mouth and he needs to wipe it all up and like I said, he needs to get that chin together. He just needs to stop talking trash. He stops talking trash, I’ll stop talking about his butt-chin. It’s that simple. I’m pretty sure me and him are going to bump heads and we’re gonna rap, we’re gonna fight, cause I don’t like him. It’s pretty much that way. And if anybody gonna get mad at me about it, I don’t care. You know me Ed Clay, I don’t ever care.”

As the reigning bantamweight champ of Virginia’s now defunct UWC, Easton (10-1) is considered one of the sport’s top 135-pounders outside the UFC.

“The Hulk” has not been able to fight yet in 2011 and spent all of 2010 on the bench due to an elbow injury and a couple of surgeries. However, Easton should be able to get back to training full steam within the next couple of months.

No doubt Faber first has his hands full with Cruz, but this is definitely laying the groundwork for what could eventually be a fight between “The California Kid” and “The Hulk.” Who likes it?