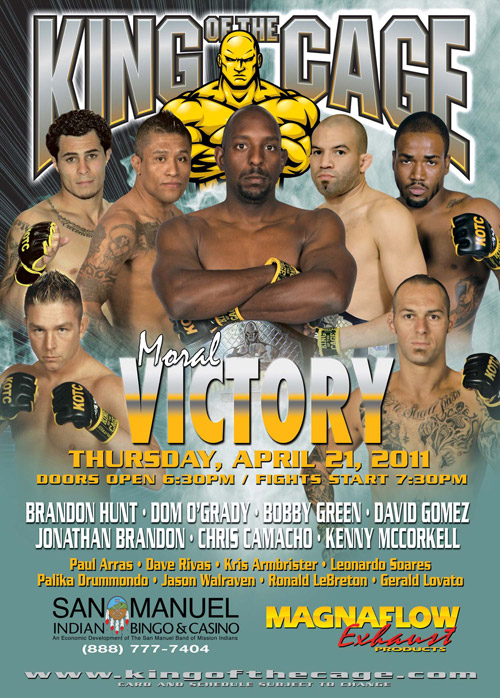 “King of the Cage: Moral Victory” will take place this Thursday, April 21, at San Manuel Casino in San Bernadino, Calif. The doors open at 6:30 p.m. and the first fight starts at 7:30 p.m.

The event will feature two KOTC championship bouts including a middleweight title fight between current KOTC 185-pound champion Brandon Hunt (6-2), who will be defending his title against Kenny “The Krusher” McCorkell (10-4).

Hunt has secured his position as King of the Cage’s top middleweight by knocking out his last three opponents. However, he has not fought since September 2010 and could be facing a bit of ring rust.

McCorkell, on the other hand, is coming off a first round TKO victory back in February, and like Hunt, has finished his last three opponents.

In the other championship bout, KOTC lightweight champion Dominic O’Grady (10-3-1) will put his 155-pound title on the line against challenger Bobby “King” Green (14-4).

Many MMA fans will remember Green for taking a short notice bout with Dany Lauzon at “Affliction 2: Day of Reckoning” in Jan. 2009. Although Green lost, that is when most people became aware just how talented he is.

Both Green and O’Grady have been challenging for titles in multiple weight classes and both are coming off losses to KOTC 160-pound champ Tim “The Dirty Bird” Means.

In addition to the two title fights, talented lightweight up-and-comer Chris Camacho (1-1) will be taking on Leonardo Soares (2-6). The hard-hitting Camacho, a former Nashville MMA product, will be looking to make a statement and be the first fighter to finish the more experienced Soares, who has been to a decision in all eight of his pro bouts.

The event will be filmed for Pay-Per-View and will be available to Dish Network, TVN and Indemand customers. Call 1-888-777-7404 for tickets or visit www.kingofthecage.com for more info.