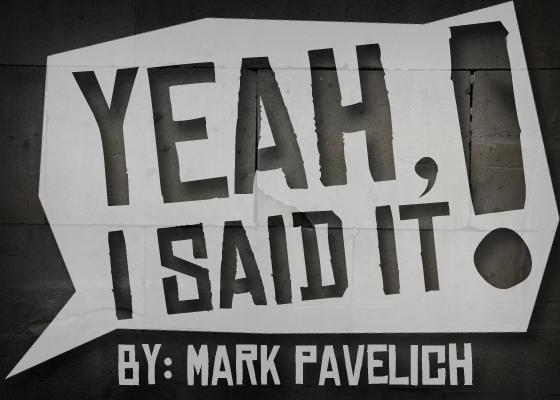 Maximum Fighting Championship Founder and President Mark Pavelich has always been one of the most colorful personalities in the sport.

As front man for Canada’s number one MMA promotion his outspoken demeanor and “call it like he sees it” attitude has won him many fans, and has turned off others.

If you are not familiar with Pavelich’s “Yeah I Said It” series, think of it as the promoter’s very own virtual soap box. In the past, he has used it to do such things as criticize Dana White and the UFC’s sponsorship policies.

This time though, Pavelich is taking on another foe — celebrity referees.

Referees have the toughest job in sport. No one is ever 100% happy with their calls, and no matter what they do someone will have a problem with it.

But I do respect what they do, and very rarely make criticisms.

However, the time has come where I do need to speak out and levy a heavy critique on officials. Not for stopping fights early, not for being in the wrong position, and not for missing a blatant foul.

No, this criticism is for the money they are costing me as the owner of the show. I don’t find fault in the guys who work the MFC events and are able to put some dollars in their back pocket. They do a job and should get paid for it.

But I find no rationale out there that is a satisfactory explanation as to why a few particular referees are charging exorbitant fees. They have, in effect, in become “celebrity referees.”

It’s outrageous and absolutely inappropriate. These certain referees are charging anywhere from $5,000 to $10,000 just to show up, bark out a catchphrase, and supervise a fight. But these fees aren’t being paid by any commission. They are paid by a show owner or promoter. And quite frankly it’s sad that some promoters feel obliged to pay them and put them front and center on a poster.

Why would they do that? Honestly, for most of them, it’s because they don’t have any talent pool to draw from so the biggest ovation of the night for anybody in the ring is for the referee. That’s a terrible statement for the sport of mixed martial arts. You don’t have much of a show if you’re paying your referee five times what you’re paying the two guys in the main event.

And how can you not call into question the ethics of these referees. Would you not expect their loyalties to be torn when some promoter is willing to pay them 10K, and that same referee is then calling the action when the promoter’s top fighters are in action.

It’s time for the commissions governing MMA to put a pay structure in place for all referees. They would be paid according to their experience, the level of competition they have overseen, and even feedback from notable fighters and insiders. There are a number of very good referees out there, including those that have worked recent MFC events. But even they shouldn’t be allowed to just toss out a price tag, or have a commission toss out one for them. There should be a pay scale in place – here’s what you get paid (plus reasonable expenses) … take it or leave it.

You don’t see referees in the NFL or NHL tossing around numbers, and then getting paid according to their individual requests. They are paid a set price by a league (in MMA’s case, a commission), and the best ones are hired for more high-profile games and playoffs.

If referees were assigned by this philosophy in MMA, I believe you would see a proper pay structure and proper protocol. You could also factor in a system where developing referees could work smaller shows to gain experience before working major events.

And I will not be bullied by a commission who just shoots a number in the air, expecting me to pay what they want to give a referee when it’s not their money. My staff and I have contacted referees first hand and know exactly what they will take as their fee.

I won’t just write a blank cheque for a ref because he thinks he’s worth it.

Will not happen … ever.

Yeah I said it!