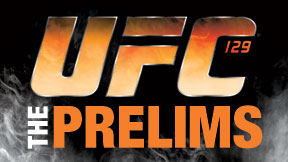 When UFC 129 hits the Rogers Centre in Toronto, Ontario, Canada, on April 30, it will be the largest live crowd ever assembled for a UFC event. It is a milestone for the promotion and the sport.

In addition to the 55,000+ fans that will be in attendance at the UFC’s first visit to Ontario, Pay-Per-View viewers around the world will get to witness UFC welterweight champion Georges St-Pierre put his title on the line against Jake Shields, in what could very well be the toughest challenge of the champ’s career.

Also, starting one hour prior to the UFC 129 Pay-Per-View, Spike TV will broadcast two of the UFC 129 preliminary card fights LIVE and FREE at 8 p.m. ET/5 p.m. PT.

Stockton’s Nate Diaz of Team Cesar Gracie has won either “submission of the night” or “knockout of the night” in six of his last nine Octagon appearances.

However, the Ultimate Fighter season five winner is coming off a unanimous decision loss to Dong Hyun Kim at UFC 125 in January and will have another tough test on his hands as he travels into enemy territory to face the Canadian-born MacDonald.

MacDonald, who trains with St-Pierre at TriStar Gym in Montreal, won his first 10 pro fights, six via first round submission, four by knockout. He has never left a fight to the judges.

MacDonald suffered his first pro loss in a three-round war with Carlos Condit at UFC 115 last June, getting stopped via TKO with just seven seconds left in the fight.

Considering MacDonald is only 21-years-old and the first loss of his career was against Carlos Condit, and he picked up a “fight of the night” bonus in the process, it is a little hard to feel sorry for the guy. In fact, it is damn impressive.

Another Canadian on the card is Toronto’s Sean Pierson. The 35-year-old native has won his last six fights, including a unanimous decision victory in his UFC debut over Matt Riddle at UFC 124 this past December.

Pierson will face 26-year-old Jake Ellenberger who trains out of Reign Training Center in Orange County, Calif. Ellenberger is 3-1 in his brief UFC career, having scored knockout wins over Mike Pyle and John Howard, and most recently won a split decision victory over Carlos Eduardo Rocha at UFC 126 in February.

Depending on the length of the fights, it is possible other UFC 129 preliminary bouts could air on Spike TV during the April 30 broadcast. For more information about UFC 129 see our upcoming events page or UFC 129 archives.