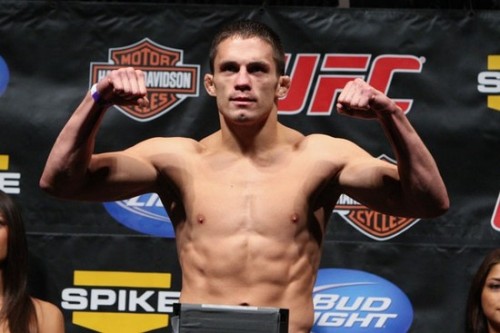 Earlier this week, Brian Foster revealed that he would be forced out of his fight with Sean Pierson due to a brain hemorrhage. Now, Jake Ellenberger has stepped in to face Pierson at UFC 129.

The upcoming UFC event takes place at the Rogers Centre in Toronto on April 30. The promotion has already sold 55,000 tickets for an $11 million gate. The attendance and gate figures will both be North American records.

After dropping his UFC debut to former WEC champion Carlos Condit, Ellenberger has returned and picked up three-straight victories. In his last fight, he picked up a split-decision win over submission specialist Carlos Eduardo Rocha.

“The Juggernaut” comes into this shortly after the news that the University of Neraska at Omaha will cut their wrestling team. Ellenberger wrestled for the Mavericks in college, and has recently worked as an assistant coach for the squad.

Pierson made his UFC debut against Matt Riddle at UFC 124. The man formerly known as “Pimp Daddy” scored a unanimous-decision victory over the TUF veteran.

Like Ellenberger, Pierson also comes from a wrestling background. He was a part of two Canadian national championship teams at Brock University.