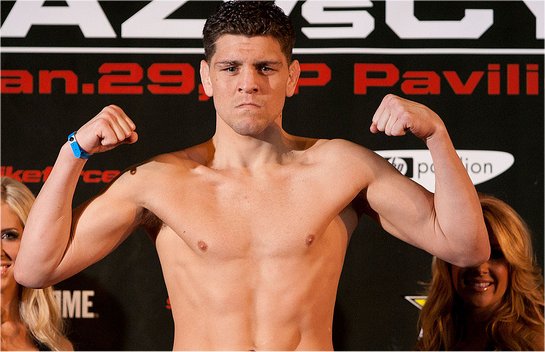 Nick Diaz and Paul Daley engaged in a thrilling main event championship fight that saw more action in the first round than some fights see over an entire bout. After huge exchanges and brutal power shots, it was the champion Nick Diaz that was still standing, stopping Daley with strikes with just 3 seconds to go in the opening round.

The trash talk from Diaz started immediately, as his jab found a home early, but it was Daley that landed his signature left hook as planned and it appeared that the champion might be hurt. Diaz went to the canvas, but quickly made his way to his feet. Daley pressed forward, blitzing the champion with power shots against the cage.

Despite the flurry from the challenger, Diaz continued to taunt Daley while coming forward off the cage. Diaz backed Daley up with a straight left hand, then closed the distance and punished the body of Daley with his trademark body shots. A left hook followed, and Daley staggered sideways against the cage, then shot for a take down trying to escape the onslaught from Diaz.

After both fighters made their way back to their feet, Diaz pressed forward again, alternating his strikes between the body and head of Daley.

In the exchange, Daley fired back and connected with his big left hook, dropping the champion in a stunning turn of events.

Diaz maintained his poise and recovered, got back to his feet, then came forward again landing a big combination of punches to the body and head. As Daley stepped forward to counter, Diaz landed a clipping left hand that sent the challenger reeling to the canvas.

Diaz pounced and landed several more punches from the top before the referee stopped the action with just 3 seconds left in the opening round.

Gilbert Melendez proved that he just might be the best lightweight in the world following his destruction of Japanese superstar Tatsuya Kawajiri.

Melendez came out on fire, dropping Kawajiri with a counter right hand after the challenger came forward looking to land early. Kawajiri bounced back to his feet, but Melendez kept up the pressure landing big knees in the clinch. Another round of knees hurt Kawajiri and backed him against the cage. Melendez dropped him again with another right hand, then the ground assault followed.

Melendez took the back of Kawajiri and continued his assault, before stepping away just long enough to put Kawajiri into the cage and land more knees and short elbows.

The two would disengage, but the punishment would continue from the champion within moments. Melendez landed another big right hand that put the challenger on the mat, and once it hit the floor, Melendez showed the world what he could do with his elbows. Melendez landed two flush right elbows that put Kawajiri away for good.

“I don’t know how to fight any other way,” Melendez said. “If I wait, I usually do bad.”

“I think it’s time we unified some titles,” Melendez said. “I’m the number one lightweight in the world, and I’m coming for that spot.”

Mousasi and Jardine battle to a controversial draw

Gegard Mousasi dominated the action over three rounds of action against UFC veteran Keith Jardine, but an illegal upkick that cost Mousasi a point in the first round changed the eventual outcome of the bout.

Jardine started the bout having difficulty getting close enough to Mousasi to land any significant strikes. Jardine adjusted on the fly, taking Mousasi down multiple times in the first round. On on occasion, Mousasi landed an upkick to the chin of Jardine as he was still grounded. After a brief stoppage, the referee took a point from Mousasi and as it turned out, that point would result in the fight being judged as a majority draw.

Mousasi took control of the bout in the second, punishing Jardine with straight, crisp jabs, and big overhand rights. Mousasi did a ton of damage in the clinch as well, landing knees and punches to the body of Jardine before disengaging to continue his assault on the bloodied face of Jardine.

Jardine managed a couple of takedowns in the round, but Mousasi easily made his way back to his feet each time. By the end of the round, Jardine was visibly fatigued, likely from the short training camp coming into the bout, along with the tremendous amount of damage inflicted by Mousasi.

The third and final round was much like the second while the fight was on the feet, but Mousasi mixed in some takedowns of his own, and nearly locked up a standing guillotine as Jardine scrambled to get back to his feet.

Mousasi dominated the positional battle on the ground, peppering Jardine with short elbows and right hands, but was unable to put the very tough and durable Jardine away before the final bell.

Aoki submits Beerbohm in 1:32 of first round

There may have been an argument as to who had the fancier “fancy pants,” but there was no argument as to how dominating Shinya Aoki was in decimating Lyle Beerbohm in less than two minutes.

Lyle Beerbohm put Aoki against the cage immediately looking for the takedown to start the bout. Unfortunately for Beerbohm it was Aoki that would get the takedown, and after the fight hit the ground, it was quickly over.

Aoki used a trip to take the fight to the mat and then patiently waited for Beerbohm to make a mistake. Beerbohm, trying desperately to get off of his back against the submission specialist, tried to turn into Aoki, but instead gave him just enough space to do what he does best.

Aoki transitioned to the back of Beerbohm, got one hook in, then the other, and started cranking on the neck of Beerbohm. Aoki re-adjusted his legs, locking up the body triangle, and after failing to get under the chin of Beerbohm for the rear-naked choke, he simply adjusted his grip and cranked until the tap came at just 1:32 into the very first round.

The quick win improves Aoki’s record to 27-6 overall, and 1-1 under the Strikeforce banner. The loss for Beerbohm is his second in a row after he started his career undefeated at 16-0.