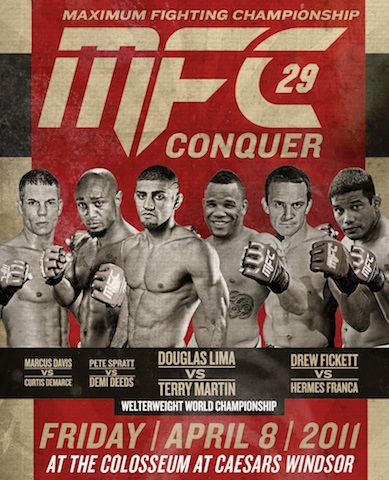 ONTARIO — Maximum Fighting Championship comes to Ontario, Canada, for the first time tonight with “MFC 29: Conquer” at The Colosseum at Caesars Windsor.

Round 1 – Spang with a body kick, clinch. Mokdad gets the takedown, on top inside half guard where he lays down some shots. Mokdad takes Spang’s back as he turtles, they roll to their back. Mokdad with a body triangle. He locks in the choke, it’s under the neck and Spang taps out of the first televised MMA fight in Ontario, Canada.

Round 2 – Right hand from Washington. Big overhand right from Franca hits Washington on the kisser and snaps his neck, Washington drops and Franca follows it up with four big rights. Josh Rosenthal stops the bout and Franca is the winner. Washington was actually the favorite in this fight.

Round 1 – Double jab from Davis. Demarce swings and misses, again. Body kick from Davis. Davis misses with a combo. Inside thigh kick from Davis. Body shot from Demarce. Lazy shot from Demarce and almost pays for it. Inside leg kick from Demarce. Davis misses a knee, lands an uppercut. Demarce shoots, puts Davis against the cage and Davis puts on a guillotine. Demarce pulls his head out. Davis locks on a front head lock, pushes Demarce against the cage. Davis gets a trip takedown, on top in half guard. Demarce gets butterfly guard. Davis now inside full guard. Elbows from Davis and body shots. Thirty seconds to go. ProMMAnow.com scores the round 10-9 for Davis.

Round 2 – Right hand from Demarce, then an overhand right. Left from Davis. One, two, three from Davis as he counters an overhand right. Uppercut from Davis, clinches, pushing Demarce against the cage. Body lock, and Davis gets the trip takedown. Body punches from Davis inside Demarce’s guard. Davis with some nice punches and elbows and Demarce is cut open. Ref calls time to look at the cut. Davis’ face is completely covered in blood. Davis is the one who is actually cut. Keep in mind MMA regulation here in Ontario is brand new so it takes a bit longer here for them to figure this stuff out. Right hand from Demarce, but he gets countered and his mouthpiece flies out. Davis lands a knee, locks on a tight guillotine but Demarce escapes. Davis gets up but Demarce takes him down hard and lands a big elbow. Demarce himself goes for a guillotine. Davis pops out and is on top inside guard. Demarce landing elbows from the bottom and this has opened Davis’ cut up badly. ProMMAnow.com scores the round 10-9 for Davis.

Round 2 – They trade kicks. Jimmo with a leg kick, body kick. Clinch against the cage. A few boos at the slow pace. Ref separates them. Head kick from Jimmo is blocked. Body kick from Jimmo and a leg kick, he gets a body lock from behind and drags Cummings down but he bounces right up. Cummings with a punch, kick that miss, catches a leg kick, lets it go. Clinch. Cummings lands a low knee and time is called. Counter right from Jimmo scores. Cummings gets a takedown, eats a knee, but Jimmo bounces right up. Clinched. Knee from Jimmo to the thigh. Boos from the crowd. ProMMAnow.com scores the round 10-9 for Jimmo. Looks like Cummings nose could be broke from that big counter punch.

Round 3 – Clinch, Cummings drops levels against the cage. Jimmo defends and the boos start. Knee from Jimmo as they continue to wrestle and clinch dance to the boo band. Knee to thigh from Cummings. Jimmo with a couple rabbit punches and they separate. Left counter and body kick from Jimmo. Cummings grabs a single, pushes him against the cage and Jimmo reverses position. Cummings reverses, drops levels. They separate as Cummings backs out, misses with a high kick. Jimmo with a counter right and gets the takedown, mounts, big elbow from Jimmo. Double punch to the ears from Jimmo, another elbow, punches and more elbows. Cummings achieves half guard. Jimmo locks in an arm triangle but Cummings bucks out like a wrestling break at the bell. ProMMAnow.com scores it 10-9 for Jimmo.

Round 4 – Body kick from Jimmo and lands a counter right  as they clinch. Cummings reverses position puts Jimmo’s back to the cage as the ref calls for action. Knee from Cummings as they break, he shoots, but is stuffed. Drops for a single, no dice. Jimmo defending well. Clinched against the cage. Cummings backs out. Jimmo gets the takedown and is on top in half guard, passes to side control, looking for a kimura, lets it go. Jimmo’s forehead leaking. Jimmo tries to mount, Cummings gets half guard. Jimmo mounts, double punches, looking to set up an armbar. Hammerfists and Cummings gives up his back. Jimmo gets his hooks in as he looks for the choke, Cummings turns back on his back and Jimmo has full mount. , moves to side control. ProMMAnow.com scores the round 10-9 for Jimmo.

Round 5 – Spinning backfist from Cummings misses. Body kick from Jimmo. Cummings shoots sloppily. Stuffed as Cummings gives up the single leg. Clinched against the cage. Ref separates them. Spinning hook kick from Jimmo smacks skin. Cummings shoots, stuffed. Body shots from Cummings. He drops levels, knee from Cummings, another knee. Jimmo with a knee. Ref separates them before I fall asleep. Jimmo flat footed. Cummings swings and misses and Jimmo lands a big body kick. Cummings shoots, stuffed. Clinched. Ref calls for work. Cummings with some rabbit punches. Jimmo misses a spinning hook kick, they clinch at the bell. ProMMAnow.com scores the round 10-9 and the fight 50-45 for Ryan Jimmo.

Round 1 – Outside leg kick from Lima. Inside leg kick Lima, misses a left hook. One, two from Lima and another big leg kick. Left hook from Lima then a big right hook that puts Martin down. Lima follows up with several left-rights and that’s it folks. What’s funny, is I just told John Buhl Lima that Martin would go to sleep in round one.