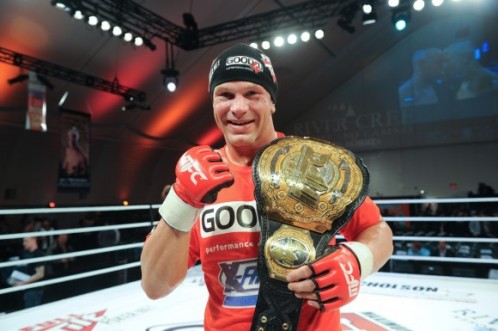 After Zuffa purchased Strikeforce a lot of people quipped that Mark Pavelich can now claim to be the second-best promotion in MMA. That remains open for debate. However, he has put together a solid card for the MFC’s first venture in Ontario.

MFC 29, which takes place at Caesar Windsor in Windsor, Ontario on Friday night, will be broadcast live HDNet. It will feature a pair of title fights, four UFC veterans and the first cage in MFC history.

Light Heavyweight Title Fight
Ryan Jimmo vs. Zak Cummings
I feel strangely obligated to say “despite his Karate background, Jimmo does most of his best work in the clinch position” since I have said it for each of his MFC fights. He should have very little trouble getting that same position on Cummings. Once there, Jimmo will be able to score and grind out a decision. Hopefully, He can come out of this fight unscathed, so that Mark Pavelich can set up the Emanuel Newton fight again.
Pick =Ryan Jimmo
Film Study: Ryan Jimmo vs. Dwayne Lewis

Welterweight Title Fight
Douglas Lima vs. Terry Martin
During his two-fight MFC career, Lima has been able to catch people with submissions off his back. This makes Martin an interesting opponent. Martin should have the wrestling to stay on his feet and make it a striking battle. He might not be the best striker in the world, but he hits with big power and should be able to best Lima on the feet.
Pick =Terry Martin
Film Study: Douglas Lima vs. Jesse Juarez

Hermes Franca vs. Robert Washington
The recipe for success is simple for Washington. He needs to get takedowns and work from the top. On the feet, he could end up eating one of Franca’s patented bombs and that would just be embarrassing. Franca has a grappling background, but it has been a long time since he has been able to lace a submission off of his back against a solid fighter. Washington was able to survive on the ground against Tyrone Glover, so he should be able to stay out trouble here.
Pick =Robert Washington
Film Study: Hermes Franca vs. Bill Cooper (grappling style)

Pete Spratt vs. Demi Deeds
Deeds has had several chances to pick up wins over UFC veterans. He beat Joe Jordan, but also dropped fights to Shonie Carter, Chad Reiner and Kevin Burns. He has several submission wins on his record and usually that is more than enough to beat Spratt. Obviously, Spratt’s problems are on the floor. If Deeds works for a takedown with utter desperation, he should be able to win. However, if he chooses to stand for an extended period it will be lights out.
Pick = Demi Deeds
Film Study: Pete Spratt vs. Georges St. Pierre

Marcus Davis vs. Curtis Demarce
I did not think the move to lightweight would make a huge difference for Davis. However, in his first fight at the weight, he looked solid until he got cracked by Jeremy Stephens. This is actually a good thing since very few lightweights have Stephens’ power. Demarce probably deserved the nod over Richie Whitson in his last fight, but he still dropped a slugfest-decision to a guy not known for being a striker. Davis should also be able to work from the clinch and end up on top. Look for Davis to get on track here.
Pick = Marcus Davis
Film Study: Marcus Davis vs. Joe Stevenson