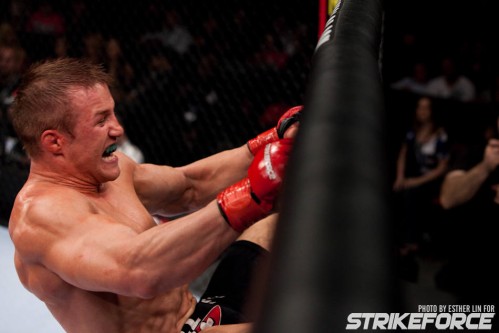 Strikeforce Challengers 15 is the first card for the promotion since Zuffa bought the product. If we are to believe everyone who has said “business as usual,” the only difference should be the “Zuffa satellite thing” at the beginning of the broadcast.

The card takes place on Friday at Stockton Arena in Stockton, Calif. The main card will air live on Showtime at 11 p.m. ET.

Normally, Strikeforce Challengers cards, which are intended to develop prospects, don’t actually have very many up and coming fighters. However, this card features a pair of fighters with next-level potential: Justin Wilcox and Scott Lighty.

Justin Wilcox vs. Rodrigo Damm
The former Edinboro wrestler has progressed nicely over the last two years. He went from getting highlighted by Mitsuhiro Ishida to picking up wins over Daisuke Nakamura and Vitor Ribeiro. He should be able to bully Damm around the cage. If he is smart, he will work mostly from the clinch, but he has shown good enough submission defense to work from the top.
Pick = Justin Wilcox
Film Study: Rodrigo Damm vs. Naoki Seki

Lorenz Larkin vs. Scott Lighty
Larkin has defeated some quality opponents with his grand knockout power. His list of victims includes Mike Cook, Mychal Clark and Grapplers Quest standout Joao Assis. Larkin’s undefeated run will come to an end here, because he is finally fighting someone with some technical game on the feet. Lighty has K-1 experience, and it shows when he fights. Like all the best strikers in MMA, he is able to avoid his opponent’s punches and counter effectively. He also lands some of the hardest body punches in the sport (see below).
Pick = Scott Lighty
Film Study: Scott Lighty vs. Mike Cook

David Douglas vs. Caros Fodor
Few fighters in MMA are nicknamed as appropriately as David “Tarzan” Douglas. He has the unkempt hair, tree-swinging muscles and a style that would work against jungle predators. His brawling style is very effective against guys who do not want to take him to the ground. Fodor, a Matt Hume student, might want to flex some of his submission game, but he is not a great wrestler. Douglas will pelt Fodor with shots as he works for the clinch position. Eventually the shots will add up and Douglas will be declared the winner.
Pick = David Douglas
Film Study: David Douglas vs. Mongkhon “Malaipet” Wiwasuk

Josh Thornburg vs. James Terry
Terry might not have next level potential, but his losses are to respectable fighters Tarec Saffiedine and Jeremiah Metcalf, and he is in line for a win here. If he can use simple straight punches, he should be able to box his way to a decision. Terry sometimes gets into trouble when he goes for highlight-reel shots, but that should not even be an issue with Thornburg.
Pick = James Terry
Film Study: James Terry vs. Tarec Saffiedine