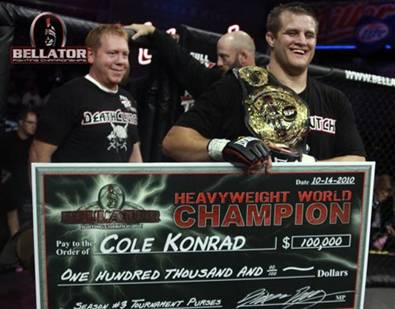 ESPN’s Josh Gross posted of his Twitter account, JoshGrossESPN, that Bellator CEO Bjorn Rebney confirmed to his that Bellator heavyweight champion Cole Konrad will return for the first time since claiming the belt against UFC and Strikeforce veteran Paul Buentello.

The post did not specify which event would host this fight. The promotion currently has four events scheduled in the month of April including Bellator 39 this Saturday. Buentello is also tentatively scheduled to face Esteves Jones on April 8 in El Paso, Texas. This article will be updated as more information becomes available.

Buentello has fought for both the UFC and Strikeforce heavyweight titles. in 2005, Andrei Arlovski successfully defended the UFC belt with a 15 second knockout of Buentello. In 2007, Alistair Overeem claimed the inaugural Strikeforce belt with a second-round victory. Over the course of his career, Buentello has picked up wins over Kirill Sidelnikov, Gary Goodridge, Mike Kyle and K-1 veteran Carter Williams.