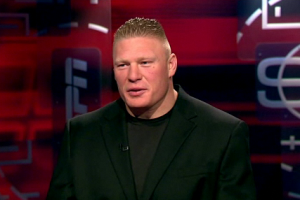 Rumors were rampant following Brock Lesnar‘s title loss to Cain Velasquez that his time in MMA and the UFC was over and that he was looking for a possible return to the WWE. Those rumors turned out to be false.

Now filling the role as coach on this season’s The Ultimate Fighter (debuts Wednesday, March 30, on Spike TV), Lesnar has his sights set on rival coach Junior dos Santos who he will do battle with on June 11.

Lesnar’s goal is to defeat dos Santos and earn another shot at the heavyweight title. That’s all that is on the former champ’s mind at this point.

He does say, however, that once his stint in the UFC is up, there is a possibility he could return to pro wrestling. If Lesnar were to lose to dos Santos, it is going to be very interesting if he still has the heart to keep fighting.