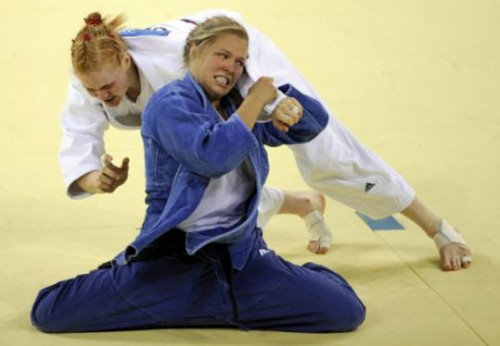 On Sunday, Olympic bronze medalist Ronda Rousey moved to 1-0 as a professional after submitting Ediane Gomes in only 25 seconds.

The bout took place at King of the Cage “Turning Point” in Tarzana, Calif. It took less than a minute for the judoka to finish her Brazilian opponent with an armbar.

The Gene LeBell student is seen as a future contender for Cristiane “Cyborg” Santos‘ Strikeforce 145-pound title. Before ever fighting MMA, Rousey competed extensively in judo. She picked up a bronze medal at the 2008 Olympics, silver at the 2007 World Champions and also won three gold medals at the Pan American Games.

Gomes was seen as a tough test for the debuting Rousey. Prior to Sunday night, “India” was 6-1 with her only defeat coming against Strikeforce contender Amanda Nunes.