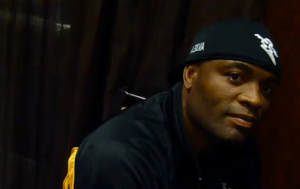 The guys from ULTMMA.com sent us over this interview they did with Anderson Silva at Rage in the Cage on Sunday. Silva had some fighters competing in the event.

First of all, Silva does the whole interview in English with no translator. Now, while there is a language barrier and it’s hard to make out everything he wants to say, a few things come through loud and clear.

Silva talks about Jon Jones‘ win over Mauricio “Shogun” Rua, calls Jones “amazing” and thinks he has what it takes to be “champion for a long time.”

Silva also talks about his win over Vitor Belfort and gives his thoughts on moving up, and even down in weight in the future. Finally, Silva weighs in on the GSP vs. Shields fight (sort of) and says there is a secret he won’t reveal.