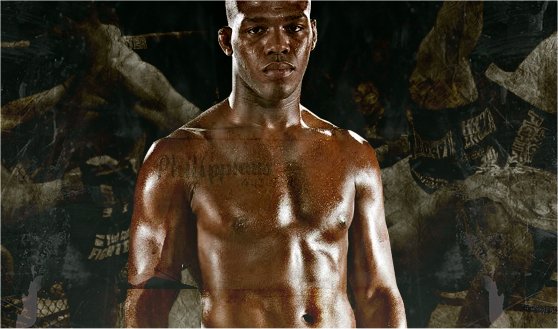 NEWARK, N.J. — Tonight at UFC 128, Jon “Bones” Jones was to face the stiffest test of his career against current UFC light heavyweight champion Mauricio “Shogun” Rua. As it turns out, he passed with flying colors.

Jones impressively battered and dominated Shogun in every facet of the game en route to a third round stoppage.

At times Jones threw caution out the window, even opening up the fight with a flying knee. Jones then took the fight to the ground and assaulted Rua with his patented short elbows and punches to the body. Shogun ate some big punches while making his way to his feet, and just as he got there, Jones delivered a kick to the head that hurt the champion.

As the stand-up battle resumed, Jones did damage in the clinch as he pressed Rua against the cage. Jones spun and landed an unbelievable spinning-back elbow that connected and hurt Rua with a straight left hand, leaving the champion wobbly on his feet.

It was more of the same in the second, as Jones aimed with kicks to the lead knee of Rua before landing another spinning elbow. Jones continued to display an arsenal of unorthodox strikes that found their target over-and-over again.

Once again Jones took the fight to the mat, delivering more damaging ground-and-pound from the top with grinding elbows. He even transitioned to a leg lock attempt on the Brazilian Jiu Jitsu black belt as the bell sounded to end the second.

In the third, Jones kept control of the fight as Rua desperately tried to get in range to mount any sort of offensive attack. Jones countered with a stiff 1-2 combination, forcing Rua to dive for a leg. Jones scrambled and ended up on top, then delivered huge punches from the top forcing the champion to turtle up to defend against the onslaught.

Showing the heart of a true champion, “Shogun” mustered up enough will to stand again, but it was just for a few seconds longer.

The young challenger delivered a strong knee to the body and after Rua stoood up straight on the fence, Jones finished things off with a strong flurry and a vicious knee as Shogun began to drop to the mat. Referee Herb Dean mercifully stepped in to halt the action at the 2:37 mark of the third round.

As the new UFC light heavyweight champion, Jones (13-1 MMA, 7-1 UFC) now knows just what that means to his competitors.

“It means a lot to me but now I know I have a huge target on my back,” said Jones. “And when you guys come and strike at me, I’ll be ready to strike right back.”

Urijah Faber won his UFC debut in dominant fashion over the resurgent Eddie Wineland after 15 minutes of nonstop action.

Wineland was proficient at stopping most of Faber’s take downs throughout the fight, but couldn’t ever get his stand up attack on track against the explosive Faber.

Faber adjusted to the clinch game of Wineland in the second frame, and then finally secured a trip take down after snatching up a single. Faber finished the remainder of the round on top, punishing Wineland with short elbows, and right hands from the top.

It would be the third round that Faber would finally start to dominate the action, beating Wineland to the punch repeatedly with clipping right hands, before dropping for and getting a late take down.

After three rounds of action, the unanimous decision victory was awarded to Urijah Faber, moving him to 25-4-0 overall, and 1-0 in the Octagon. The loss marks the first after four consecutive victories for Eddie Wineland (18-7-1 MMA, 0-1 UFC).

“Dominick if you are out there, hide your kids, hide your wife, hide that UFC belt baby,” said Faber. “I’m coming to get it!”

Kamal Shalorus had said that he would use his wrestling to keep the fight on the feet against Jim Miller. It turned out to backfire on him.

In the first, after several minutes of toe-to-toe action and big exchanges, Miller threw caution to the wind, going for a guillotine and pulling guard, giving up position to go for the victory. Shalorus easily pulled out of the submission attempt and ended up on top to close the round.

In the second, it was more of the same, but Miller finally went to his takedown game, putting Shalorus on his back midway through the round. Miller then took the back and locked up a tight body triangle, then went to work on the neck of Shalorus. The rear-naked choke attempts were not successful, but Miller dominated the round.

In the third, the two fighters got back to work on their feet, and as Shalorus leaned in to throw a punch, Miller perfectly countered it with an uppercut that rocked Shalorus. As Shalorus instinctively looked to duck in for a take down, Miller closed the distance with a crushing knee that sent Shalorus to the canvas against the cage.

Miller wasted little time putting the exclamation point on the sequence, landing over 15 unanswered blows before the referee could stop the fight.

It was a truly impressive finish for Miller (19-2 MMA, 8-1 UFC), and one that has to move him near the top of the lightweight division.

Miller threatened Marquardt on several occasions with his go-to guillotine choke, but Marquardt managed to escape on each occasion. Despite Miller constantly going for submissions off his back, Marquardt punished Miller from the top with grinding elbows and right hands in the first stanza.

Marquardt started to find his range in the second, landing several lead rights, and threw in a flying knee for good measure during one exchange. After a take down from Marquardt, Miller would once again lock up a guillotine, this time managing to close up his guard in the process, but Marquardt remained poised, and then proceeded to land big elbows from the top again.

The third round would see the most striking out of the three, with Marquardt throwing and landing his right hand, while Miller countered with right hands and uppercuts. After a take down by Miller was stuffed late in the round, Marquardt managed to spin and then end up in the guard of Miller once again. After delivering more ground and pound, the winner would be determined by the judges.

After nearly three full rounds of take downs and clinching with Mirko “Cro Cop” Filipovic, it would take only one punch from Brendan Schaub to put away a true legend of MMA.

Schaub stayed very aggressive throughout the first and second rounds, closing the distance and going to the clinch not giving “Cro Cop” any space to get off one of his patented kicks.

Almost every time that “Cro Cop” would start to get his rhythm on the feet, Schaub used his speed and athleticism to change levels, shoot, and get picture-perfect take downs.

After being warned for hitting the back of Filipovic’s head, Schaub would be deducted a point late in the second stanza for the same offense while in the clinch, and came into the third round bloodied after being hit with a flush elbow during the same exchange that cost him a point on the scorecards.

In the third, Schaub would once again shoot in and get yet another take down. However, “Cro Cop” would get back to his feet after a scramble, and subsequently stuffed the next attempt of Schaub.

Schaub remained aggressive, and after perfectly anticipating a kick from “Cro Cop,” countered with a right hand that sent the former Pride superstar reeling to the canvas. Schaub followed up with one more punch before the referee could step in and stop the fight.

The win marks the fourth consecutive victory for Schaub (8-1 MMA, 4-1 UFC), since his loss to Roy Nelson at the TUF 10 finale.