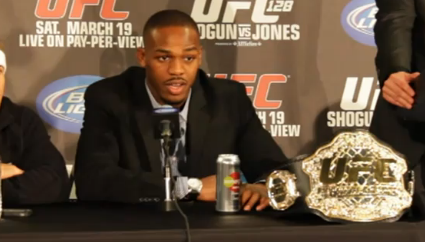 So UFC 128 is in the books and now it’s time to bring forth the five most important talking points coming out of the event. I have to admit that the event was a bit underwhelming for me, mainly because the main event was so one-sided. I mean, I predicted that Jon Jones would beat Shogun with a TKO in the third round, but I thought Shogun Rua would at least touch him.

-Jon Jones is a beast. A part of me wants to say that Shogun was injured or something. That’s just how dominant Jones was on Saturday night. Maybe it was the long layoff again. Shogun did look pretty bad against Forrest Griffin and Mark Coleman. However, he was fighting a different animal on Saturday night. You know the super-fight that everyone has been talking about between GSP and Anderson Silva? I’m a supporter of that fight. Well, I was a supporter of that fight. Now, the super-fight would be a match-up between Jon Jones and Anderson Silva. I’ll have more on that later this week.

–Jim Miller is the real deal. I knew Miller was good, but he really impressed me on Saturday night. He dominated Kamal Shalorus and put him away impressively, something no one had been able to do up till that point. I think Jim Miller would give Frankie Edgar a good run if Edgar is able to retain his title against Gray Maynard (Edgar defeated Miller by decision in 2006 before either had reached the UFC). However, if Maynard wins I think Miller’s chances of winning drop pretty significantly. Maynard is huge and has such a powerful wrestling base that Miller struggled to mount any offense when the two faced off at UFC 96. Of course, all of this is speculation because we don’t know whether Miller will get a title shot next. Either way, he’s definitely up near the top.

–Urijah Faber vs. Dominick Cruz is next according to Dana White. Faber already holds a win over Cruz, but that was at featherweight 4 years ago. Cruz has improved considerably and brushed aside all of the competition thus far at 135, so that would certainly be a rematch worth watching. Faber struggled to get Wineland down to the ground on Saturday, so it’ll be interesting to see how he copes with a better wrestler in Cruz.

–Nate Marquardt looked good on Saturday night, but that fight was tailor-made for him. Props to Dan Miller for stepping in on short notice; that guy is tough and the UFC should keep him around since he’s bailed them out on numerous occasions. Marquardt has a problem though, having already lost to the top contenders — Yushin Okami and Chael Sonnen — and current champion Anderson Silva. A fight with Michael Bisping might make the most sense.

–Mirko Cro Cop should retire. Dana White indicated that Saturday night was Mirko’s last fight in the UFC. He gave Brendan Schaub a decent scrap, but he should call it quits. I’ve been saying this for the past two years, but maybe now he’ll finally do it. Schaub is a promising prospect, but he has a ways to go before he’s a contender. I’d like to see him take on the winner of Frank Mir vs. Roy Nelson.

In other news and notes, Luiz Cane did what he was supposed to do against Eliot Marshall. He couldn’t afford to lose that one, as it would have been his third in a row. I’d like to see him face Ryan Bader next. Edson Barbosa and Anthony Njokuani put on a striking show. I actually thought Njokuani deserved that decision, but it was such a close fight it could have gone either way.

This was the first of several huge UFC PPV’s that are lined up back to back. UFC 129 and UFC 130 should both do incredible numbers, with several great fights on each of those cards. Be sure to check with us each day this week and I’ll be previewing the main card of the upcoming UFC Fight Night: Nogueira vs. Davis.