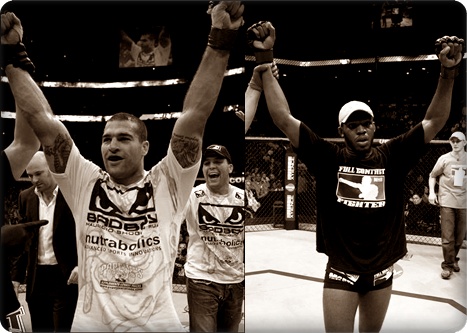 The UFC 128 main event between UFC light heavyweight champion Mauricio “Shogun” Rua and #1 contender Jon “Bones” Jones is one of the most anticipated fights so far this year. The crazy thing is that this fight just got announced last month and the hype has been building nicely. The long layoff for the champion and the dominating performances of the rising phenom have made for an interesting story-line leading into this fight.

Jon Jones comes into this fight with a massive amount of hype, but he has beaten to solid opposition up until this point. He has a career record of (12-1) with 7 wins via TKO/KO and 3 wins via submission. Of course, the only loss is a disqualification due to the use of illegal blows against Matt Hamill. A fight in which Jones dominated from start to finish. Jones brings solid wrestling, athleticism, unorthodox striking, and a huge reach advantage into this fight. He earned the shot at Rua by dismantling Ryan Bader last month.

Mauricio Rua comes into this fight off a long layoff. He hasn’t fought since winning the title against former champion Lyoto Machida last May. He brings a career record of (19-4) with 16 wins via TKO/KO and 1 submission to his credit. Rua is very aggressive striker with a base in muay-thai and also a black belt in Brazilian jiu-jitsu.

I understand that Jones has the huge reach advantage and prides himself on being unorthodox with his striking, but if he wants to win this fight he needs to take Shogun down. Shogun doesn’t have great take-down defense and Jones should be able to take him down relatively easily. Rua is a black belt in jiu-jitsu, but he’s not really a threat to submit anyone from his back or at least he hasn’t shown that thus far in his career. He does have a very good sweep game though. Jones needs to use his size to wear Shogun down since he’s coming off the long layoff and possibly finish him late in the fight with ground and pound. He shouldn’t stand with Shogun much at all, doing so would allow Shogun to attack his legs with those vicious kicks which would nullify the explosive advantage Jones may have. Also, Rua has an excellent chin while Jones hasn’t really shown that he has huge power in his strikes. Take Shogun down…use his size and finish him late.

Rua simply needs to keep the fight on the feet and stay off his back. If he’s taken down, he should look to get back up to his feet ASAP. He shouldn’t even look to submit Jones from the bottom unless he absolutely catches him early to save energy he’ll need later in the fight. I think Shogun would be most effective by attacking the legs of Jones with those nasty kicks of his. That would accomplish two things, nullify the reach advantage, and slow Jones down as the fight goes on. If this fight turns out to be a battle of striking, I expect Rua to beat Jones up something serious.

It’ll be interesting to see what Shogun will do once he’s taken down. Jones shouldn’t make the mistake of trying to strike with Shogun just because it’s his strength as he did with wrestling and Ryan Bader. Rua is too experienced for that, and Shogun can do big damage there. I expect Jones to take Rua down and work inside his guard while trying to move to half-guard and then side control looking for the crucifix position. I expect Rua to try and sweep, but having little success because Jones has a solid wrestling base and seems to be very powerful. I think Jones will rinse and repeat until Rua’s conditioning begins to fail in about round three or four, and then he’ll finish with Rua with ground and pound late in the fight to become the new UFC light heavyweight champion.

3 thoughts on “UFC 128 preview: Can Shogun Rua stop the hype of Jon Jones?”